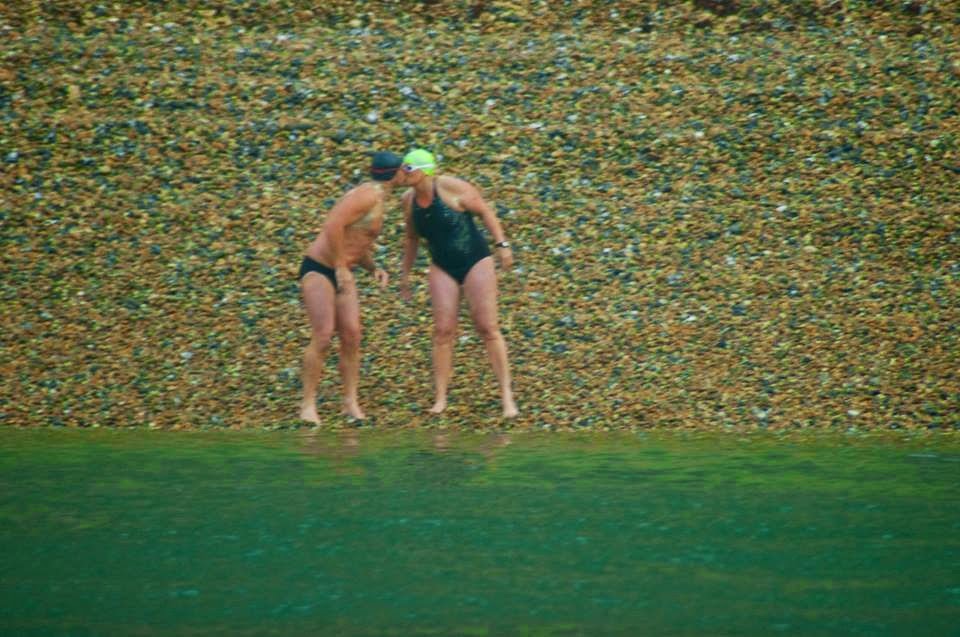 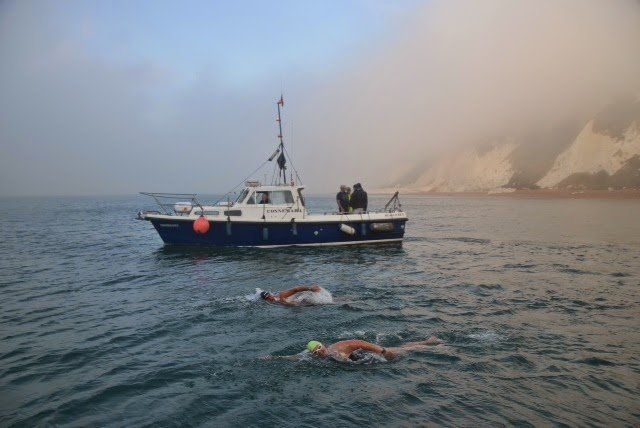 Jeanine and Anthony Pearse both swam successfully and simultaneously across the English Channel on the same day a few days ago. The husband and wife were the the seventh and eighth South Africans to achieve a Channel crossing this year.

Jeanine writes about her journey:

“My husband Anthony and I have just returned from the United Kingdom after the last stretch of an incredible journey chasing my life-long dream of swimming across the English Channel. On the 20th of September, we both successfully crossed the English Channel.

Our journey began with a text message I sent to Anthony in July last year. I bravely asked his opinion on what he thought about me wanting us both to swim the English Channel. After many, many years away from swimming the thought then seem so ludicrous and far-fetched to me that I was afraid to verbalise it in case he laughed. I therefore opted instead to rather to text him. The reply was back within minutes: a definite YES. Anthony’s unwavering belief in me and his constant love, support, patience and encouragement have been unbelievable. He is the biggest blessing of my life and without him none of this would have been possible.

To have taken this journey together is the stuff dreams are made of.

For me, it has been a very personal, tick-the-bucket-list journey. It was never about breaking any records, but purely for personal fulfillment.

I hope that we have been able to teach my beautiful, incredible daughters Hannah and Jemma that life is about dreaming big and having courage to embark on journeys to chase those dreams. There is much you cannot control on the way, but you have to work hard, believe, never give up and give it everything you have. All of this I was taught as a child and for this reason I carried with me in my heart especially my beloved Mom, Mother Colleen and my Dad, Oupa Stonie. I have no doubt they were with me and around me giving me the strength and courage they always did throughout my life.

We received the final go-ahead on September 19th at round 7 pm with instruction to be ready to depart from Folkestone Harbour at 6:30 am the following morning. The anticipation and days leading up to the swim are honestly awful and far worse than the actual swim. With any Channel crossing there are countless factors you cannot control which could greatly influence the outcome of the swim. After more than a year’s preparation, with the best possible support crews in place, we were set to go hoping we had the right tides, the right route and reasonable weather and wind conditions ahead. After heading from Folkestone Harbour we set off at 7:55 am from Samphire Hoe beach; Anthony being piloted by Kevin Sherman on Connemara and myself by Fred Mardle on Masterpiece.

As planned, we swam together for possibly five minutes before Anthony set off at his own pace.

Ahead of us lay a stretch of wide open grey sea, crossed by two of the world’s busiest shipping lanes. Oh, how I missed the clean seas of our fairest Cape. This piece of ocean called the English Channel is a mass of angry, nasty, choppy, lumpy and very salty water. The swell and chop was relentless the whole way across constantly coming at us from different directions.

Add to all of that some serious tidal current and there you have you challenge.

On and on and on you go. Feeding every 45 minutes, the hours somehow do slowly tick by. The physical challenges are constant, but nothing at all compared to the mental challenges you face It’s one long mental roller coaster ride. Yes, there were darker moments and challenges, but all in all I felt a great sense of calm, quiet and strength. A sense of humor tucked in your back pocket is a much needed requirement. I laughed and commented to my crew that at the feeding stops I very much felt like a penguin in the aquarium as bottles with liquid nourishment where thrown at me on 30 meter lines.

I opted not to know where I was until 5 hours and 30 minutes had elapsed.

The toughest physical stretch by far was the first shipping lane; it was very busy, dirty and extremely choppy with some awful jellyfish. Both Anthony and I found between the 7th and 8th hours very tough mentally. You very definitely find yourself out there in that channel. Digging deep, you somehow hang on and keep moving forward. My spirits definitely started to lift as my crew indicated we had hit French waters. Because of the size of the swell, it was almost impossible to see ahead. Only when I saw a sign saying “I smell garlic snails” did I stop, look and orientate myself.

France was indeed in sight with possibly only 3 km to go.

One of the happiest moments of my life was seeing Anthony on board my boat. He had landed on a white beach in Wissant Bay in 9 hours 33 minutes and had been brought onboard to support me on my final stretch. We finished 57 minutes apart, but the strength of the current is such that I in fact finished almost five kilometers further south just beyond the dreaded, feared and respected Cap Gris Nez.

Half delirious with joy, elation, relief and utter mental exhaustion, I clambered onto a rock and signaled to the boat. It was over. Unbelievable. I was completely astounded that I had managed to make it across in 10 hours and 30 minutes, a time far faster that my expectations.

Swimming the English Channel is not easy. It’s by far the toughest thing I have ever done. I know now for sure though that any person with enough will and determination to face all the difficulties can for sure cross the English Channel. It is a possible, achievable dream. All Channel swimmers have their own stories, but all are similar in one respect – ‘Nothing is impossible with determination”.

A very big thank you for all the support we have received from so many. To try and thank people by name would be impossible. So many people have influenced our journey is so many different ways and we are both so very grateful.

My dream was always that my journey of chasing the dream would end somewhere on the French coast with Anthony at my side. I guess that dreams can in fact come true. 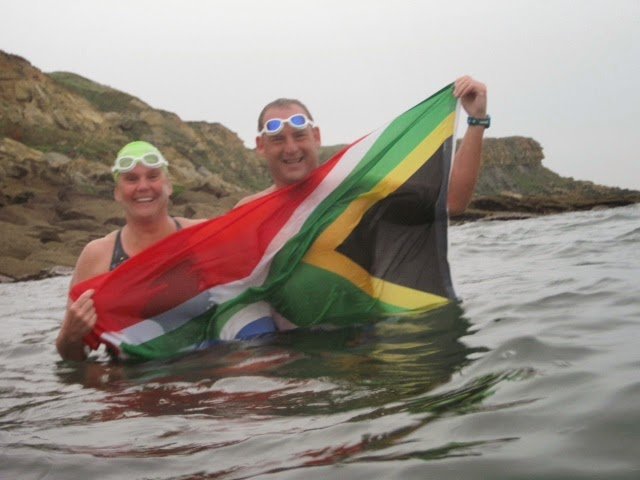 On Saturday, 20th of September at around 6:30 pm somewhere on a rocky beach at Cap Gris Nez, we together raised our leaden arms towards the beaten sea.

The pair crossed under the auspices of the Channel Swimming Association. President Michael Read remarked on their success, “This was almost certainly the first husband and wife pair to successfully cross the Channel on the same day. We also had a brother and sister crossing on the same day, finishing within 15 minutes of each other. We have had twins crossing on the same day with identical times. One other husband and wife pair, swimming on different occasions, swam in identical times, if I remember correctly. And we have had at least 4 husbands and wives [over history].”