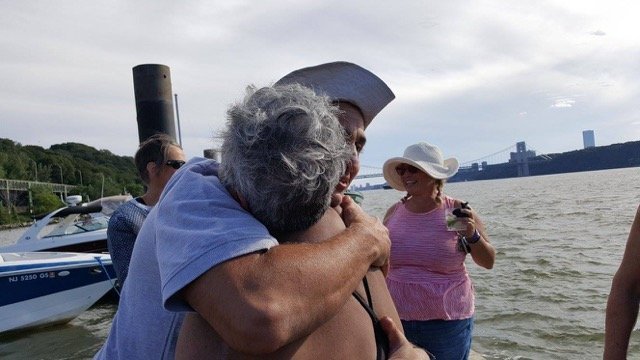 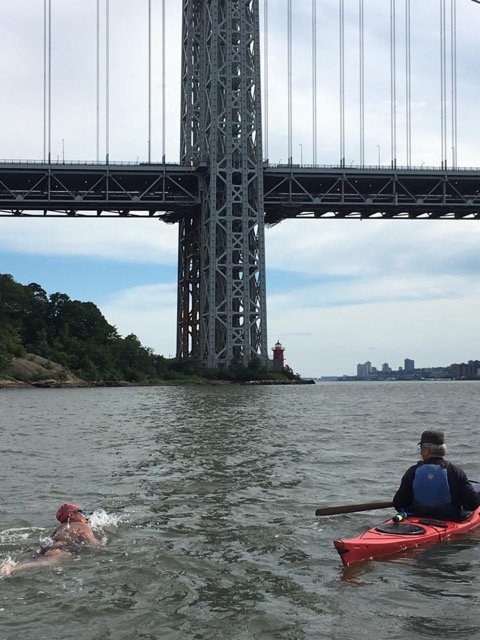 She took 6 hours 1 minute to swim 15.7 miles (25.2 km) from the Tappan Zee Bridge to the George Washington Bridge.

The Project Manager for M&J Edelman & Associates in New York City explains her journey to the finish. “This was my fourth attempt; I started in 2012.

I have strength, stamina and mental fortitude, I just need speed. In my past three attempts, I had missed the switch. I was pulled when I started going backwards, being pushed upstream by the incoming flood tide. But still I never gave up
.”

Her track record in Stage 6 of the 8 Bridges is as follows:

Fortunately, this year, there was a wind from the northwest at 10-20 mph. This helped push the swimmers downstream with the outgoing ebb tide. Based on the 11:12 am start time, the organizers would start pulling swimmers at 4:24 pm when the incoming flood tide started at the George Washington Bridge, or when the swimmers no longer made forward progress. “Basically, I had 5 hours 12 minutes to make it to the George Washington Bridge. I swam my best.”

The start was a little bumpy as the wind and waves came from the swimmers’ back and right. “I breathe right – so I was getting smacked around. My feeds were every 30 minutes. After the second feed, I asked Terry O’Malley, my paddler, if we could try the other side, so I could breathe left and away from the waves. We did, but after a few minutes he said my stroke count went way down and the other swimmers were pulling away from me. So he put me back on the other side – breathing right as I continued to get smacked by the waves, trying not to swallow too much of the river.

Djatiasmoro turned left to breathe and sight every once in awhile to see how fast she was passing the houses along the river’s edge. “I saw the ebb was picking up, but I knew not to slack off. I had to keep up the pace. Terry said my stroke count was between 53 and 54. Usually, I am around 57 spm. Terry also said I was taking too long on my feeds. I had liquid Carbo Pro. I guess I was not getting enough because after awhile I got cramps in my calf, but I just kept kicking with the one good leg until the cramp passed. I did pee once, but nothing to speak of, so I knew I was dehydrated, but I just kept swimming.”

Eventually, Djatiasmoro passed Spuyten Duyvil. A Circle Line tourist sightseeing boat came out of the Harlem River and passed behind her as it turned downstream into the Hudson River. “I wondered what they thought as they looked down on [me], this lone swimmer in the water. I knew I was the last swimmer.”

Then the paddler and swimmer passed La Marina, the restaurant where the post-swim party was held. “Terry was waving [to] all the finishers [who] were on the docks waving and cheering for me to finish. We were a little over one mile from the George Washington Bridge. I saw the bridge getting closer and closer. I would breathe left every now and then to check and see if we were still moving, if I still had the downstream ebb push. I know the flood tide comes up the river midstream, like an arrow; the sides are the last to switch so they take the slower swimmers to the sides so they have a chance to finish. I was on the East side, on the New York side, by the Little Red Lighthouse stanchion.”

After being pulled for three years, Djatiasmoro finally crossed the finish. “I swam underneath the George Washington Bridge. I was so relieved to be under the bridge.” But then confusion reigned. “Why was everyone screaming for me to keep swimming,” she wondered.

“Then BOOM, it hit me like five bowling balls. The rolling eddies of the flood tide had come up so strong, it pushed me back with great force. It also pushed the support boats back. Terry was yelling for me to swim mid-span of the bridge, where the flood was not so strong. So I did, or tried to, but the incoming flood tide was unrelenting. There was no winning this one.”

She made it under the bridge – but then she was pushed back. “I did not realize that I had to swim to the other side of the bridge for the finish.”

But race organizers, David Barra and Rondi Davies credited her for an official finish. “I swam so hard for this. Later I found out that David and Terry were discussing the best position for me to finish, in order to get to the other side of the bridge. David had said bring me in tight to the corner, to the lighthouse stanchion; Terry had said to bring me out in the middle, mid-span of the bridge.”