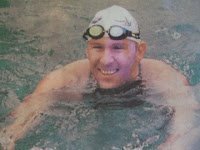 After his athletic career was over, he shifted gears and utilized his talents from pool decks and shorelines. The Ministry of French Sport hired him to develop swimming in the Picardy Region. He coached Amélie Caze, the 2010 world champion in Modern Pentathlon in 2010 who qualified for the 2012 London Olympics. He was also the National Coach at the National Institute of the Sport, the Expertise and the Performance where he coached swimmers to two silver medals at the 2004 Athens Olympics, one at the 2005 World Swimming Championships, five golds at the European championships (2003-2006), and one gold medal at the 2002 European Junior Championships in the 5K.

A bilingual expert who understands solo swimming, competitive swimming, coaching and administrative duties related to the sport, Stéphane will be a wonderful addition to the Board of Directors at the International Marathon Swimming Hall of Fame.