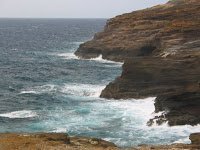 After learning about the 22 hour 29 minute 47 second marathon swim of Stephen Redmond across the Moloka’i Channel (Kaiwi Channel), we stand in awe of the Irish swimmer and everyone else who swims distances that pushes them beyond the reasonable and the normal.

After leaving Papohohako Beach on Molokai Island at 6:00 pm and swimming through the night, he finished at China Walls at 5:59 pm the following day.

Epic is often used by marathon swimmers, but in this case, the adjective is truly apropos. It was his final few hours in the rough Hawaiian waters that are legendary given the layout of the giant lava rock that Stephen was trying to reach.

Lifeguards, surfers and swimmers familiar with Oahu shake their heads at the extraordinary lengths that Stephen swam to complete this swim. With the currents running against him, Stephen missed Sandy Beach on eastern Oahu (near white number 4 in the map on left).

With the traditional finish point for channel swimmers on Oahu an impossibility, he kept on swimming hoping against all hope. But he also got swept past Hanauma Bay (number 3 in the map on left) where the famed Keo Nakama, Mike Spalding and Kelly Gleason once landed on their Molokai Channel swims.

But Stephen was not broken yet.

He continued to swim despite facing sheer rock cliffs, jagged lava rock and perilous bits of terra firma jutting out like razor-sharp wire into the warm Pacific (see photo above) as his crew desperately looked for locations to finish. Climbing up a sandy shore or even an outcropping with pebbles was a luxury Stephen was not afforded on this day. True to his nature, he kept moving southward and westward past the extinct volcanoes and towards Diamond Head.

Only when he reached the sheltered waters of Maunalua Bay was there any possibility of ending his day-and-night-long torture. He navigated his treacherous finish at China Walls (near yellow number 4 on the map of Oahu above).

“I still cannot believe we got away with it, but they tell me we did I was in shock and near death when I got out. But with such people as you behind me, I cannot fail. Thank you all,” posted Stephen on his Facebook page.