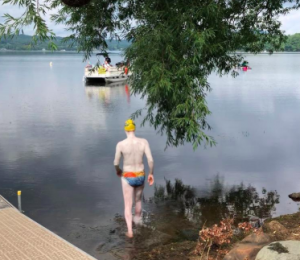 The 39-year-old from Indiana started on the shores of Newport, Vermont, USA at 11 am on August 22nd in an attempt to become the first man to complete a two-way cross-border crossing of Lake Memphremagog. 25 hours 12 minutes later on August 23rd, Rouch set the record for the 50-mile length of Lake Memphremagog between Newport, Magog, Québec and back to Newport. He cleared the water, walking onto the shoreline in Magog at 10:40 pm for a first leg crossing of 11 hours 40 minutes. He re-entered the water after 3 minutes and swam back to his start in Newport, landing at 12:12 pm completing his second crossing in a time of 13 hours 32 minutes. 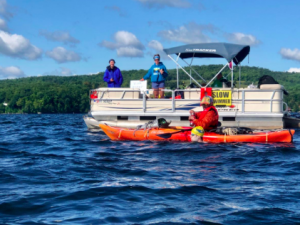 Sarah Thomas was the first person to complete a Memphremagog Double Crossing.

Phil White reported, “The swim is part of a series of expeditions and solo swims of the length of Lake Memphremagog known as In Search of Memphre, organized and hosted by Kingdom Games, and sanctioned by the Northeast Kingdom Open Water Swimming Association with a mission to support a more open border with our Canadian friends and to seek out our swimmer friendly lake creature, Memphre.

Water temperatures were between 70°F and 74°F the length of the lake. The air temperature was in the high 50°F’s at night and rose to the upper 60°F’s to low 70°F’s during the day. Winds were 5-17 mph from the southwest during the first few hours of the swim. After 5 hours, the wind dropped to 7-8 mph shifting to the west. The wind shifted to the northwest for the last few hours of the swim.