Steve Minaglia Does His 19th Channel Crossing With Friends

Steve Minaglia Does His 19th Channel Crossing With Friends

A short time after the group finished, Dr. Steve Minaglia successfully completed the Kaulakahi Channel himself swimming on a different line and landing on Niihau after dark, finishing in 12 hours 38 minutes.

It was his 19th successful channel swim. 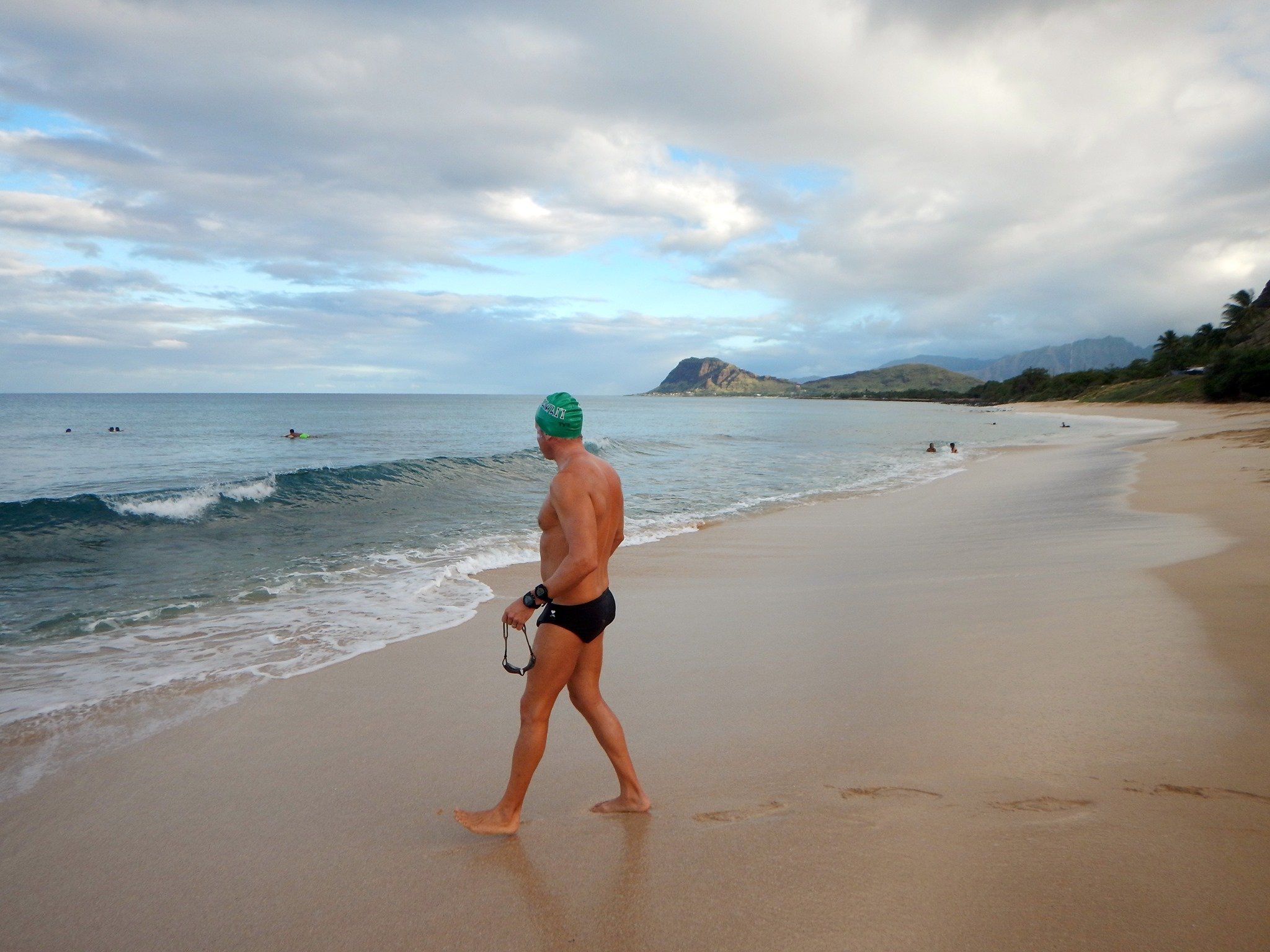 The doctor from Oahu tells him journey, “The Kaulakahi Channel was my favorite swim to date. Three of my kids- 15-year-old Vivienne and Olivia, and 13-year-old Luke crewed for me as trusted captain Koa Fuller guided us all across the channel. My oldest daughter Isabel…was reluctant to crew after my attempt in June where my friend and training partner Quinn was horribly stung by a lot of man o war. My wife Madeleine also came to Kauai to support the swim.

I want to thank several people including my wife for supporting me and being by my side for 26 years. All of my kids for stepping up, crewing, and tolerating all the orders barked at them during the swim despite their seasickness. Koa Fuller for his heart of gold in this pursuit which went way and above driving the boat. He encouraged me, he kept his cool during the several shark encounters we had, and he accepted the challenge of letting me finish in the dark. Quinn Riordan for being my friend and training partner this whole year and having my back. The ‘Kaimana Pod’ including Marek, Rae, Pua, Alex, Kelly, and Thomas Plaggemeier for doing the same. Mark Tan for all of his guidance and support of me, a perfect stranger to him. Mark, Koa, Quinn, and a few University of Hawaii researchers all suggested the path I should have taken, but somehow I took a longer more difficult path due both to my directions and omissions. As many of you know, I always seem to screw something up during the last phase of planning.

The conditions were easy that day. The big swells mid-channel were anticipated. The wind was light so the water was easy to get the stroke down. The currents were strong though. At times, I went only half a nautical mile in 30 minutes. I swept way north the whole day largely due to my poor decision to launch from Barking Sands Beach. The last time Quinn and I launched from Kokole Point. Some of the prior fast crossings were from Barking Sands, so I thought this would be smart. I ended up swimming over 33 kilometers and finishing in the channel between Niihau and [the uninhabited island of] Lehua. Koa warned me.

There were 3 times where a group of 3 sharks circled around me. It was early in the swim before 11 am. Koa spotted them and told me about it during a feed. They looked brown to me, but my goggles were tinted. Everyone seemed okay with this so I figured I should play it cool. The sharks seemed curious, but not aggressive. The first sighting Koa suggested I swim to see if they followed. They disappeared from my sight so I just kept swimming. I shot some video during the third encounter and hopefully can recover it from my now water-damaged iPhone (lifeproof case leaked).

Koa was stressed about finishing in the dark. To my knowledge, Mark didn’t finish his first two attempts because of the dark and concern for safety. I knew if I could get close, Koa would let me finish. At 3 pm, I was pretty far out. I sprinted from 3 to 7:30 pm with the hopes of getting in range. Around dusk, I was in the channel that separates Niihau and Lehua.

I changed goggles to clear, put a green strobe on my goggle strap that I got from my friend Joe Zemaitis, put a waterproof flashlight and whistle in my suit, and put two glow sticks under my goggle strap. Because of the shallow reef, I had to swim into shore for about 30 minutes. I could not see land except when Koa shined his strobe on it. This helped but also blinded me to some extent. Lehua seemed huge across the channel at that point. I had to crawl on the reef after hitting it in the dark. At some points, I could stand and walk on the reef, but soon after feeling safe, I fell into a hole and almost was trapped. The crashing waves pulled my goggles and gear off. I could not recover the glow sticks, but I was able to grab and get the goggles back on. I then had to swim a bit more to the shore.

This was the scary part because Koa and the kids would not be able to come to my rescue. The last bit seemed to be a smooth rock that I just needed to crawl over. The water was clear, there was a glow from the sky, and I could see sea glass on the beach. I used my flashlight to show the crew I had landed safely and Koa flashed the strobe light again to help me get off Niihau.

Thankfully I did not need to use the whistle and the flashlight helped them find me again. It was harrowing, but somehow controlled. Always attach some glow sticks to your suit. I had the pins but omitted this, I have always done this in the past. Several things could have gone wrong at this point. I was super lucky. The boat was drifting and it would have been easy to get lost or get run over. The flashlight was key to show completion and find me in the water.

This was my 19th channel crossing. I swam some with people and some alone. Swimming alone is a whole different thing. It is easy to get dark and filled with doubt. A supportive voice from the crew is key. Also having my kids there helped me to stay focused and finish. I talked long with Koa tonight about the sharks. He appeared to me very calm when he saw them, so then I felt calm.

Tonight he told me he was worried, but after I put my goggles up and asked for another feed, he thought, ‘This guy doesn’t seem to care.’ Communication can work in mysterious ways. The sharks got closer on the third round, but strangely seemed harmless. I also talked to Koa about the dark. I put the crew through a lot of stress because it was about an hour from the time the boat stopped escorting to the time I was back on the boat. Little could have been done except I could have spent a night on Niihau.

I want to thank Alex Webb for teaching me the scopolamine patch/tegaderm trick. I have been dealing with more and more vomiting over the last big ocean swims and I believe this was key (in addition to the Dramamine and Zofran) to keeping the feeds down, wanting more, and swimming the whole channel with power.” 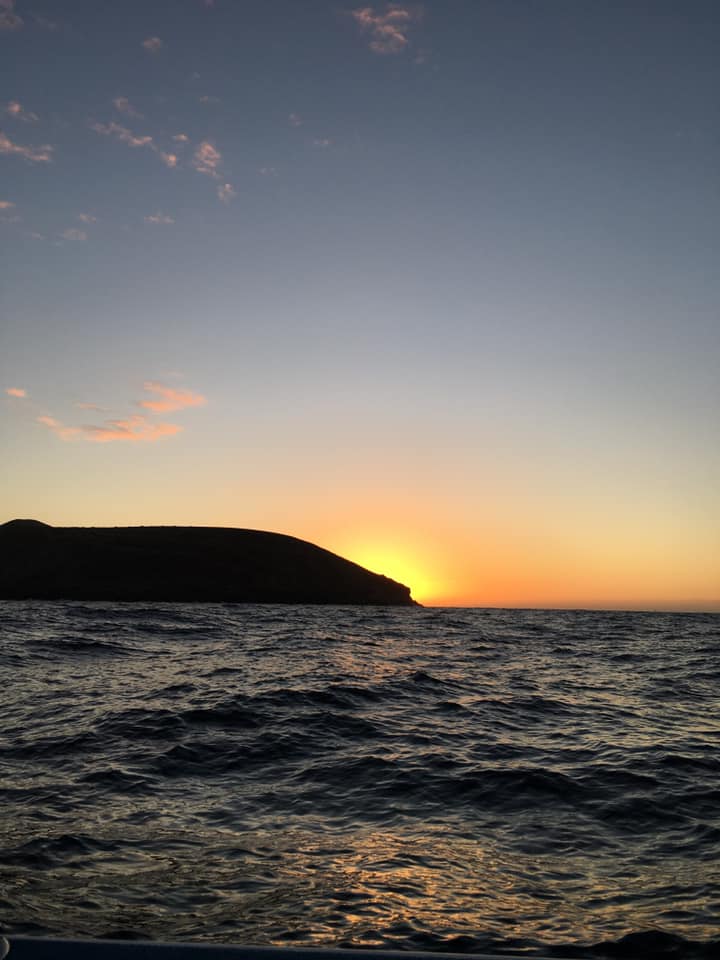