Steve Wargo Swims Through The Night Across Lake Erie 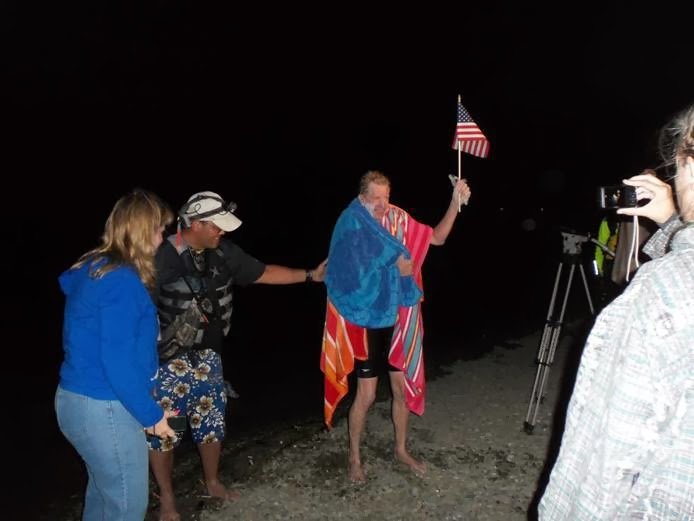 “My father served the United States in military roles for his entire life and both my parents are buried in Arlington National Cemetery in Washington, D.C. Because of this connection, it was very important for me to raise that U.S. flag at the end of the swim,” explains Steve Wargo at the end of his 19 hour 7 minute swim across Lake Erie.

As a charity swim for The Wounded Warrior Project, he raised awareness and US$3,000.

“Raising that flag was a huge motivator and honor for me [because] failure was not an option.”

Last summer in August, Wargo became the 16th person, first Ohioan and oldest person (at the age of 55) to complete a 24.3-mile (39.1 km) swim crossing of Lake Erie, from Long Point, Ontario in Canada to Freeport Beach, North East, Pennsylvania in the U.S.A. “The swim began at 8:30 am on July 31st and ended at 3:37 am August 1st. I swam into a north-bound current for the first 7 hours slowing my progress to just over 1 mile per hour.”

As the long-time open water swimmer (Strait of Gibraltar, Great Chesapeake Bay Swim, Swim Around Key West, Mouth of the Potomac, Alcatraz) fought the current through the night, the water temperature fortunately warmed from 68°F (20°C) on the Canadian side and to 70°F (21°C) on the U.S. border, but he faced another bane of aquatic adventurers.

“Over the final 6 miles, most of which was in the dark, a 15-mile wind from the south impeded my progress to under 1 mile per hour. Three-foot waves jeopardized the swim as three support kayakers had difficulty with the chop.” But he got through the turbulence before things settled down a bit. “Finally the last 2 miles were somewhat protected by the cliffs on the U.S. shore and the swim was complete.”

A crew of nine dedicated people supported the swim. “Kevin McCardle served as my coach and principle kayaker. Also supporting the swim was Dr. Eric Mizuba, the 14th person to complete this swim.” The support team kept Wargo energized with a runny hot oatmeal most of the way across. “I threw out my food plan in order to get just a little more warmth.”