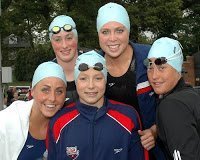 With only 25 berths available in the Olympic 10K Marathon Swim, there are domestic battles before elite athletes can face their international rivals.

Back before the 2008 Beijing Olympics, the competitive rivalry between the Mexican swimmers literally came down to the last stroke during the Olympic 10K Marathon Swim qualifier. It was heartbreaking to miss an Olympic opportunity in such a photo-finish. This year, around the world, similar rivalries are taking shape.

Whether it is David, Tom or Daniel – or Eva, Ashley, Christine or Emily – or some other upstart – time will tell.

The open water swimming world has come to expect the unexpected.