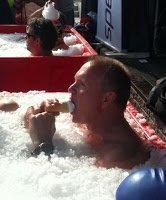 A polio victim at the age of 9 months, swimming is his only effective exercise. And it seems the colder, the better.

“The post race temp is measured about 15 minutes after the swim once you have dressed. The idea here is that you should be at your coldest by then, once all the cold blood from your extremities has flushed back into your core.”

One of the more hardened swimmers of the open water swimming community, the International Ice Swimming Association member is certainly tough. “The water temp the day before the swim was around 16°C . Overnight it dropped to 13°C. I wasn’t too worried. I had previously completed a 7.5 km swim at 9°C and from that point on warmer water was just not a concern. I also seem to be resistant to the cold having never got cold enough to shiver. My first and only shivering experience had been after my Ice Swim [one mile at 4°C].”

Stiff also has the open water swimmer’s mentality that he can deal with anything that the ocean throws at him. “The swim kicked off an hour late due to thick mist. Jumping into the water at the start of a swim is always a shock to the system. However as there was quite a lot of surf to swim through, I had something else to think about which made the start easier.”

His mindset and approach is cold, rough water is telling. “It is just a matter of settling down, getting a good rhythm going. I can always feel the chill around me, but I just ignore it and concentrate on my stroke. What was a little strange on this swim was when I found a warmer patch, I found myself stopping for a few seconds to warm up. What a crazy thought: stopping in 15°C water to warm up.”

Crazy thoughts, and some would say crazy deeds. But Stiff makes it look easy.