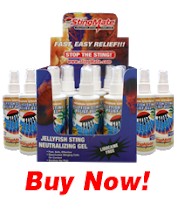 Out of curiosity, we inquired how, why, where and when StingMate® was invented. The story was strange, but absolutely true.

Julie and Webb Willmott were visiting a drug store while on vacation in Destin, Florida when a man rushed in because his wife had just been stung by a jellyfish.

The man was panicking with his wife in pain. He initially ran up to Webb and Julie with a tube of Preparation H and ask if that would work on a jellyfish sting. Webb, who has a masters in chemistry and pharmacology, quickly utilized his professional know-how and went over to the over-the-counter section. He grabbed four different products, mixed them together and…viola…StingMate® was born.

After the incident, Julie asked her husband if those ingredients could be combined into one. Webb consulted with his multiple patent-holding father and refined, remixed and reformulated the original product. Within a few weeks, the product was finished, but the team was not satisfied. They spent two more years before their commercial release and handed out over 10,000 free samples to beach and ocean rescue units, life guards, the diving community, surfers and swimmers all over the world for feedback.

After receiving overwhelming positive feedback on its effectiveness, StingMate® was launched and now the product is packaged in a convenient spray bottle that includes a neutralizing gel. The primary ingredients of acetic acid (vinegar) and menthol works by inactivating the stinging jellyfish cells. The menthol provides a cooling sensation and the spray formulation provides immediate relief for the affected area, small or large, since the patented gel does not run off the body as would plain vinegar. The gel suspends the stinging cells and allows remaining ones to be simply scraped off the skin with any straight edge card.

From a pharmacy in Florida to beaches around the world, the success story of StingMate® is wonderful to hear.