Strait Of Gibraltar Having a Record-Setting Year 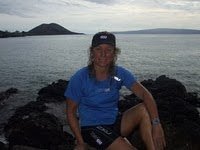 a slew of people attempting the Cook Strait and the Tsugaru Channel, it is not surprising that the Strait of Gibraltar is booming with swimmers since Mercedes Gleitze first crossed in 12 hours and 50 minutes in 1928.

The Strait of Gibraltar season got off to a fast start when Penny Palfrey (shown above) set a new women’s two-way crossing record of 8:27.

But, like many marathon swims, the road to success was not easy.

“It was a frustrating start when our first attempt ended due to fog less than two hours into our swim. Both [husband] Chris and I were swimming well, Chris was in the middle of the shipping lanes and I was already on the Moroccan side in under the woman’s record pace.”

“The following day we were up early again, still surrounded by fog but given the chance to try again and to see how things go.” It went well to say the least as Penny set a one-way crossing record of 3:03 from Spain to Morocco and Chris finished in 3:59.

“On our return leg, we were surrounded by pilot whales (shown below).

It is not surprising that Penny set a new two-way record. Her stroke tempo is quick (80 spm), she bilaterally breathes efficiently and effortlessly both towards and away from the surface chop, her body is streamlined as her toes are pointed, she uses her legs as ballast, remaining balanced and symmetrical as she goes over swells, she swings her arms and hands high over the ongoing swells as she times her stroke through the waves and her eyes largely faces down helping her maintain an optimal body position although she raises her neck subtly enough to avoid swallowing water. Despite the turbulence, Penny’s experience and concentration enables her to swim parallel to her escort boat with minimal deviation. This high level navigational IQ results in a straightline course where she doesn’t waste effort on raising her head to sight and reduces the ultimate distance that she swims.

Despite pushing her pace, Penny’s sixth sense was sharp enough to know that the cries of pilot whales that she heard were stressed. “My swim was going well as I battled my way through the head wind, current and the busy shipping lanes. The pilot whales’ cries were still stressed. It was then that my crew saw the shark. Dan was in the inflatable boat beside me with the Spanish boat driver who drew a cross over his chest for me and said ‘Blanco’. Dan turned on the Shark Shield and I saw Blanco swim underneath me, his large grey shape disappeared into the depths below.”

Despite the shark scare and heightened winds and surface chop, Penny’s technique never wavered. It was a remarkable effort.