Strong As A Rok, Part Of The Marathon Family 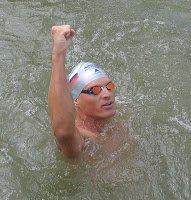 Rok Kerin from Slovenia, appeared on Open Water Wednesday. In the interview, Rok talked about his life as a pro marathon swimmer, his travels and his impressions of his fellow marathon swimmers.

His commitment to the sport, his daily training regimen and his concern for everyone involved in the sport are all examples of his passion for open water swimming. Smiling despite linguistic obstacles, optimistic despite a lack of financial support, and friendly to those who cross his path on land and in the water, Rok is a wonderful ambassador of the sport. He makes friends easily and quickly builds bridges between peoples of various cultures on his aquatic adventures on several continents.

He sees the marathon swimming as an ideal of Olympic competition, requiring dedication, physical endurance and mental strength. He also sees his competitors as part of an extended family who share common thoughts, common dreams and common experiences.