Focused Preparation For The Sea Of Cortez Swim 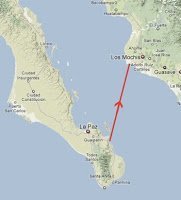 Six swimmers – 3 from Mexico and 3 from the US – will be together for a long time on the high seas: between 30 – 40 hours. Teamwork and camaraderie will be the highest priority as sleep deprivation and fatigue start to set in on the second day of non-stop swimming in the Sea of Cortez.

As Christine Gonzalez joins her American and Mexican teammates for a 182K aquatic journey from west to east across the Sea of Cortez.

“I was already swimming regularly, but back in February, I started swimming six times a week and would occasionally do double workouts. The first workout would usually be with the Stanford Masters team. The second workout of the day would usually be a solo swim where I’d just swim for an hour straight without stopping.”

Physical preparation was only part of her game plan.

“My concerns were around the mental aspects of the swim. Would I get bored? Would I get scared, especially at night? Would I get sick of being in the water? So I have really tried to address this in my training. I practice zoning out, swimming and just letting my mind wander. The key for me was to not count laps or pay attention to time.”

Christine certainly leaves nothing to chance.

“In March, I was doing more doubles and would occasionally swim for a third time in the day. My new full-time job has made training more difficult. Since then, I’ve been swimming six to seven times a week with at least two doubles.”

While the water in the Sea of Cortez is warm, Christine prepared herself in the cold, cold waters of San Francisco Bay.

“I joined Vito Bialla in the bay. We would swim from his boat in Tiburon or from the South End Rowing Club in San Francisco Bay. At this point, I don’t think it has hurt me to not swim in the open water for the last month of my training. Besides, just 11 days away from the swim, the mental component is the largest piece for me.”

Body and mind. But Christine added other stresses to her body.

“I ran a marathon at the end of April, so I was cross training with running. I’d run one to two times a week, but also have one long run. Mentally, I wanted to do this because it was reassuring that I could run straight for 3-4 hours without any problems. I maintained a simple resistance training program as well. My focus there was stability and injury prevention.”

Her commitment to her teammates is admirable, “My biggest motivation is being part of such an incredible team. Of the group, I am the one with the least experience. I wanted to make certain I had done everything I could to deserve my spot on this team.”

You have, Christine. You most certainly have.