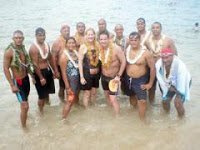 Bruckner Chase‘s film, “Blue Journey: American Samoa – Stronger Together” has been accepted into the 2014 Beneath the Waves Film Festival.

The films of the Festival are produced by scientists, conservation advocates, students, and amateur and professional filmmakers from around the world. The films are showcased in large-scale events hosted in Jacksonville, Florida, and 11 other film events in venues around the world that directly engage the public.

“This is our way of bringing the ocean to the people,” explains Festival Directors Austin Gallagher and Erica Staaterman. “We are a unique worldwide film festival and communication platform whose mission is to give the oceans a voice through digital media and scientific storytelling. The films at Beneath the Waves help to inspire, motivate, and educate others on ocean science and conservation.”

The schedule is as follows: