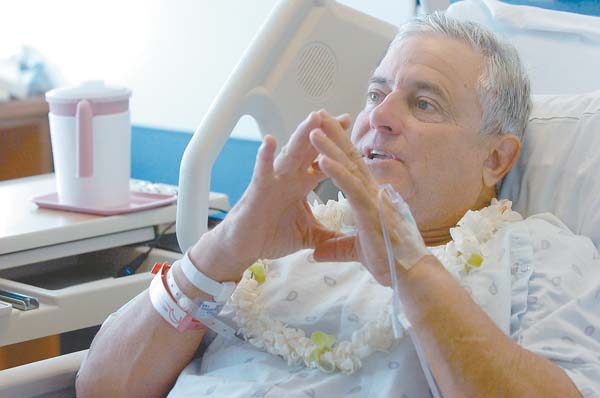 The attack on Mike Spalding during his Alenuihaha Channel swim from the island of Hawaii to Maui in the state of Hawaii by a cookiecutter shark was the focus of a study co-authored by researchers including Randy Honebrink of the Hawaii Division of Aquatic Resources, Robert Buch of the Florida Program for Shark Research at the Florida Museum and National Oceanic and Atmospheric Administration Fisheries Service, and physician Peter Galpin of Maui Memorial Hospital.

The study of the first cookiecutter shark attack on a human in history.

It appears in the July edition of Pacific Science warns that swimmers entering the cookiecutter’s range of tropical ocean waters may be considered prey.

As Mike found out, cookiecutter sharks feed near the water’s surface at night with unique jaws that specialize in scooping out a piece of flesh, leaving victims with a crater-like wound.

“Not only is it painful, but it presents a difficult circumstance for recovery in the sense that there has to be plastic surgery to close the wound and you have permanent tissue loss,” said co-author George Burgess, director of the International Shark Attack File housed at the Florida Museum of Natural History on the UF campus. “It’s not as scary as ‘Jaws,’ but it’s very different from any other kind of attack we have in the International Shark Attack File because of the size of the shark and the modus operandi.”

Photo shows Mike Spalding in the hospital recovering after the attack.