Success In The Eastern Provinces 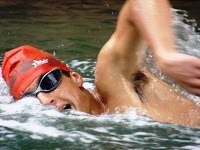 Mike Zoetmulder, Series organizer, remarked, “In addition to our top competitive swimmers, six entrants in the 10K were over the age of 40 which shows the sport has appeal to the top master’s swimmers as well as the open age group,” in a reference to masters winners Brenton Williams and SanMarie Woithe.

Photo shows Dominic Greeff on his way to winning the 1K swim.