Summer Swimming In The Channel Islands 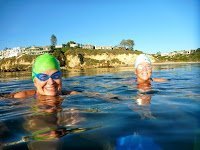 Scott Zorning, president of the Santa Barbara Channel Swimming Association, announced 26 channel swim attempts between the Channel Islands and the coast of Southern California during the 2012 summer season.

Most of the swims are from the small volcanic island, Anacapa, that lies about 11 miles from the California, while a few of the marathon swims will challenge the longer channels from San Miguel Island and Santa Cruz Island.

San Miguel Island is 25.9 miles (41.6 km) off the coast. This swim has been conquered only once by Penny Palfrey in 2008 in 11 hours 29 minutes. Walter Bean Scott will attempt this swim on September 21st.

Santa Rosa Island is 27.5 miles (44.2 km) off the coast. This swim has been conquered only once by Marc Lewis in 2008 in 15 hours 46 minutes. On August 19th, Santosh Patil of India will set off on an inter-island swim from Santa Cruz Island to Santa Rosa Island.

Times have never been busier in the Channel Islands.