Summer Swimming In The Strait of Messina

Nino Fazio prepared a report of all the swims in the Strait of Messina.

“It was a very intense season with two new records in the female single crossing and a male double crossing. But the record set in 1975 by Giovanni Fiannacca (30:50) still stands.”

In July, Giovanna Finocchiaro (see above) swam for Changing Diabetes. After 40 years of a sedentary lifestyle, Giovanna decided to change her life and prove to herself and other diabetics that they can live better than before. She finished in 1 hour and 46 minutes including time spent for an insulin injection after her last stop. “Although she had to have contact with other people during the injection and hang on to the boat while the doctor was assisting her, we decided to accept this exception and include her swim in our ‘gold book’“.

In August, a 17-year-old local swimmer Cesare Fulci, did the fastest crossing in 35 years in 31:11, only 21 seconds away from eclipsing the 1975 record set by Giovanni Fiannacca. 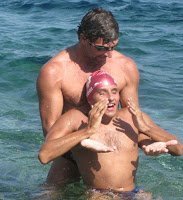 Andrea Cadili (shown on left) did a special swim in August. Andrea has osteopesudoglioma, a rare disease that has led to blindness and the loss of the use of his legs.

Andrea swam through currents and jellyfish with no other help other than two swimmers at his side to finish in a very respectible time of 48:27.

“Words cannot express what we felt during his swim,” reported Nino.

After his initial double crossing record of 1:30:33 set in July, 49-year-old Nino tried again in Septemer and set another record in 1:22:23 with Giovanni Arena as his pilot.

Another fast solo swim in September (32:44) by 16-year-old Rolando Candiano shows that the next generation of open water swimmers is ready to take the helm.

These swims were piloted by local boatman Giovanni Arena. Giovanni is a masters swimmer from Nuoto Milazzo and works as a helmsman on the ferry boats that cross the Strait of Messina every day. “All the best crossings of this summer were led by him,” explained Nino. “He is a really great guy, who takes every swim as his own and encourages the swimmer far beyond his obvious task as a lead. He is humble and proud at the same time – and a great friend for the Strait.”