Summertime From Kalamata To Koroni With Attila Mányoki 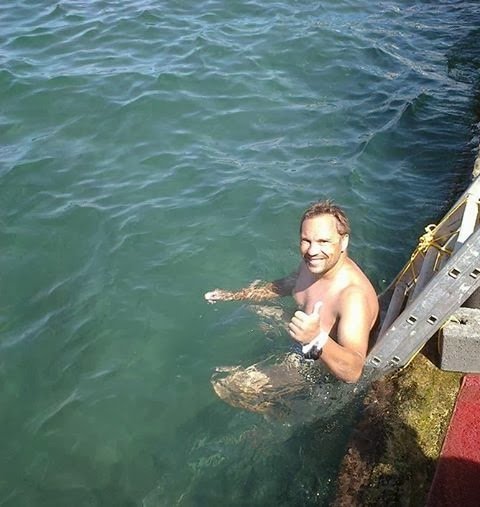 Days after completing the English Channel in 10 hours 47 minutes in August, Attila Mányoki of Hungary headed over the Kalamata, Greece for the 25th annual Kalamata – Koroni Marathon.

“On August 22nd, I drove back from the English Channel and I left for Greece on the 27th. During this time, there wasn’t a chance to swim because my trips and other meetings. But I was able to swam a little in the warm, clear seawater at Koroni on the 28th, giving me two days for the swim and recovery. But I felt OK.

The night before, I checked the weather conditions over the Messinian Gulf. The forecast predicted a change in the wind direction and a current, not strong but enough.

In the beginning, I was swimming with Fernando Ciaramella and Eduardo Baca of Argentina. They left me around the halfway through [the 30 km] the distance, but when came the wind and waves, I was swimming next to them around the seventh hour. After a hard 30-minute [surge], it was finally enough and Fernando was 3 minutes behind. I felt good because there wasn’t any pressure on me. I just enjoyed my swim. Of course I was tired but it was sweet. I finally won the event after 22 years. In 1991, it was the first time that I swam there – it was my first international marathon swimming competition. Every year, I swam there. In the last few years, I did a double-crossing, but my aim was to do 100 km or more but finally lost it. I will not to try [these long swims] in the future; this challenge is over there
.”

Mányoki’s last several swims in the Swimming Marathon of the Messinian Gulf are as follows:

He also swam in the Austrian Cup series in preparation. “In all the events, I did well with my speed was okay and I knew my training went well.” And it all came together in the summertime in Greece.

Results of the 25th annual 30 km Swimming Marathon of the Messinian Gulf: