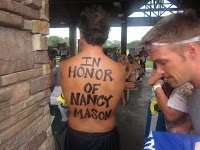 130 swimmers took to the venue, many of whom had never done an open water swim before and brought home-made pies and other Southern delicacies for the potluck BBQ picnic.

Swim Across America Executive Director and 1988 Olympian Janel Jorgenson, and Swim Across America board member and 1980 Olympian Craig Beardsley spoke about their mission, “Swim Across America is essentially a fundraising organization with swimming as the vehicle. Today’s swim was not a race because we want people to have the best experience of their life. In many ways, we are a family, a growing family. Almost everyone knows someone touched by cancer and we hope to be the benchmark for swimming fundraisers.”

Janel added, “It has been amazing to see the energy in this community and the difference a small group can make when they put their minds to it – people were electrified.” 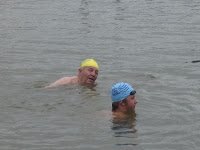 The personable promoter and event chairman who doubles as the Middle Tennessee Swim Club coach, Ron Chlasta, (shown on left in blue swim cap) explained why there was no timing or place recording, “Our goal was to put on a fun, safe, fundraiser. By eliminating timing and trophies, we were able to focus on the charity aspect of the swim in hopes of raising more money.”

First-timers like Erika Wollam-Nichols had some inspirational motivations to enter – as a recent cancer patient, he therapist suggested a goal in her fitness training designed to help swelling in her leg. 85-year-old cancer survivor John Steinhauer (shown on left in yellow hat) completed the 1-mile swim backstroke and without goggles. John, who once swam with Franklin Delano Roosevelt, is no stranger to swimming as he swims one mile in a pool three times a week. 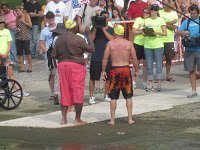 Dana Baker, a contestant on a TV reality show called Obese, was there to complete his goal of a one-mile swim. After singing the national anthem at the opening ceremony, completing his one-mile swim, Dana was given Swim Across America’s annual Wave Maker Award, presented to the individual who exemplifies the spirit of swimming and charity.

The hopes, dreams and good that has come from the Swim Across America continues to astound – even in a less-than-stellar economy – where Janel and her team is now organizing 15 open water swims across America for cancer charity and is on track to raise at least US$4 million in 2010. “Our goal is to find a cure for cancer and we’ll keep swimming until a cure is found.”