Superman Of The Open Water World At It Again 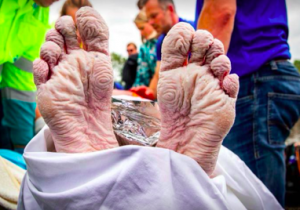 Superman Of The Open Water World At It Again

Courtesy of Maarten van der Weijden, Netherlands.  After swimming 163 km over 55 hours in his native Netherlands last year, 2008 Olympic 10K marathon swim champion Maarten van der Weijden generated over €5 million euros in his 11 city charity swim – called the Elfstedentocht Swim or the Eleven Cities Swim. To date, this amount represents the greatest amount of proceeds from a single charity open water swim in history. And the former world champion will do it again: a second attempt of the famed 200 km Elfstedentocht course to benefit the Dutch Cancer Society (KWF). 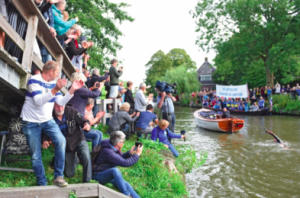 Maarten van der Weijden followed the Elfstedentocht course (English: Eleven cities tour), a famed long-distance tour skating event, almost 200 km long, which is held both as a speed skating competition (with 300 contestants) and a leisure tour (with 16,000 skaters). It is held in the province of Friesland in the north of the Netherlands, leading past all 11 historical cities of the province. The tour is held at most once a year, only when the natural ice along the entire course is at least 15 cm thick; sometimes on consecutive years, other times with gaps that may exceed 20 years. When the ice is suitable, the tour is announced and starts within 48 hours. The Elfstedentocht follows a closed or circular route along frozen canals, rivers and lakes visiting the eleven historic Frisian towns: starting in Leeuwarden, Sneek, IJlst, Sloten, Stavoren, Hindeloopen, Workum, Bolsward, Harlingen, Franeker, Dokkum, then returning to the Bonkevaart near Leeuwarden for the finish. Van der Weijden was forced to get out due to exhaustion. For more information in Dutch about Elfstedentocht 2.0 next week, visit here. The former leukemia survivor – the only leukemia survivor to win an Olympic medal – raised the money for research into cancer, a disease that he suffered himself where he once lost half his body weight. In the photo above, van der Weijden’s feet show a tremendous wet-wrinkling response after he was pulled out due to the prolonged time he spent in the water. “I remember his Olympic victory like it was yesterday.  He was so open and willing to share how he trained for the Olympic 10K final.  He had no secrets and he was – is – the epitome of an open water swimming ambassador,” recalls Steven Munatones. “With 250 meters to go in the Olympic course in Beijing, Maarten was still at least 3 body lengths behind David Davies along the final homestretch. I believe his tremendous finish represents the greatest upset and most moving and unlikely finish of all events throughout modern-day Olympic history.  He is a champion like no other – both during his Olympic career and his post-Olympic career – which includes unprecedented amounts of money for cancer research.” Copyright © 2008-2019 by World Open Water Swimming Association