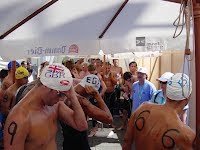 Superstitions exist throughout the world of sports and life. When the outcome of an open water swim or race is unknown, some athletes feel compelled to introduce a bit more control and a dash more good luck into their equation.

Many athletes across the competitive spectrum, borders and cultures, prepare the same way on the day of a competition; they wear their sportswear just so; and they eat a specific food in a specific order.

So what are some superstitions or habits used by open water swimmers or their coaches?

These are a few that we have heard about in oceans, lakes and rivers around the planet:

1. Warming up the same way before a swim or race
2. Swinging your arms the exact same number of times before getting in the water
3. Cleaning the right goggle lens before the left one
4. Giving the shore a slap before entering the water
5. Saying a prayer before getting in or doing the Sign of the Cross at the shoreline
6. Taking no bananas onboard (due to a fishing superstition)
7. Asking your coach/trainer to wear the same lucky hat throughout the swim
8. Using the same water bottle
9. Stopping only after the left hand goes into the water
10. Asking a priest, minister or pastor to bless the swim/swimmer
11. Swimsuits, caps and goggles must be color-coordinated
12. Diving into the water on the count of three
13. Removing clothing, head gear and shoes in the same order
14. Sleeping with a marine chart under your pillow
­15. Put your goggles in the same pocket each time
16. Avoiding stepping on the lines in the parking lot
17. Finishing a workout with an even number (e.g., 4000 as opposed to 4,250 yard)
18. Calling for a feeding when the second hand precisely hits 60
19. Getting marked with a race number on your right arm before the left arm