Surface Chop In The Oceans vs. The Lake 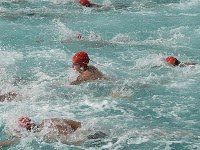 It just has to get done.

If you want to be prepared for everything in the open water, you should also practice under windy conditions and not avoid surface chop that comes with blustering winds. If you only practice in the early calm of the ocean or the tranquil glass of lakes on non-windy days, you simply won’t be prepared for the inevitable.

Train in the wind; practice when its tough.

Try to replicate the possible conditions during a race when the surface chop inevitably swells the ocean and whips it up like the frosting on a lemon meringue pie.

But for some reason when comparing turbulence in an ocean and a lake, I relish the challenge of the ocean turbulence…and hate the lake chop. For some reason, I can handle getting slopped around in the ocean; slapped by whitecaps as I look down in the deep blue below the surface. Compared to fresh water waterways, the struggle against the salt water elements somehow seems “natural” for reasons that I cannot explain.

When there is chop on a lake – even relatively minor chop – the conditions for swimming just feels without a flow or connection. I can feel “in synch” in rough conditions in the ocean or seas, essentially bodding up and down and right and left without rhyme or reasons, but that is not the case in lakes.

Bruckner Chase agrees, “I feel the same way about the lake chop. I deal with those conditions often across our back Bay when the wind, boat traffic and tides converge to make it an unpredictable white cap mess. My last two hours of Tahoe in 2005 were like that and Lake George in 2007 was a nightmare for hours. Ocean stuff, I love it.”

For those who can feel and connect with how the ocean moves, it seems to be a strange but true phenomenon.