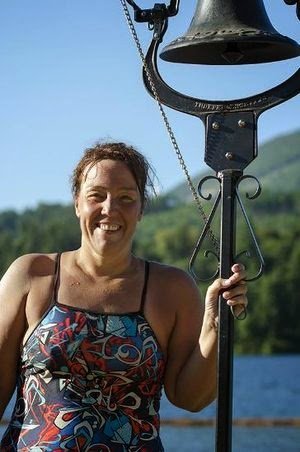 They plan to step up their game this summer in a major way: they are planning a double crossing of Cowichan Lake in August.

If a 70 km double crossing of Cowichan Lake is not enough, Simmons also suffers from multiple sclerosis (MS), an inflammatory disease in which the insulating covers of nerve cells in the brain and spinal cord are damaged.

“In a nutshell, staying healthy and fit is part of how I manage and combat multiple sclerosis. Finding the right type of exercise when you have MS can be challenging because we often suffer from heat intolerance. Overheating can increase symptoms and cause attacks. When I swim, I am constantly cooling in the water, which makes exercise possible.

Marathon swimming has be great as I can push myself in the sport more than I can with traditional pool swimming. With pool swimming, you are often called upon to sprint, which can also cause one to overheat. My MS seems to respond well to marathon swimming. I can go for hours, pushing my body in a ways that I never imagined possible
.”

Simmons was diagnosed with multiple sclerosis almost 20 years ago. She has been swimming for the past 8 years to help manage the disease. When she first started swimming, 20 laps of the pool would lead to 2- to 3-hour naps. Three years ago she swam with an all-women’s relay team across the Strait of Georgia, and two years ago swam 10 km solo from West Vancouver to Kitsilano Beach in the Vancouver Open Water Swim’s Bay Challenge.

Simmons and Cape will attempt their 70 km marathon swim between August 22nd and 23rd from Lakeview Park to Heather Campground and back.

“We expect the swim to take between 24 and 28 hours to complete,” predicts Simmons. For someone who only picked up open water swimming in 2011 and then started modestly with a wetsuit, short distance swims, and relays, Simmons has literally come a long way. Few swimmers in history have completed a lake swim of longer than 70 km (43.4 miles).

Cape and Simmons started training for their dream swim in October 2013 under the direction of their coach Danielle Brault with the Victoria Masters Swim Club. “We expect to swim between 1,500 and 2,000 km as part of our preparation,” said the 49-year-old who regularly does her open water training around Thetis Lake. “It’s the ideal place to train. One loop around the lake from the main beach, behind the second island, and back is 1.5 km and takes approximately 25 minutes. We stop briefly after each loop to fuel-up. This is similar our plan for Cowichan Lake, where we will pause and tread water every 30 minutes while we feed, and then carry-on.”

Escorted by a safety crew and escort kayakers, the pair plan to leave Lakeview Park at 2 pm on Friday. Carol Pal, a friend of Simmons who also has MS, will swim with them for the first 10 km, rest overnight, and then join them on their way back for the last 10 km.

Once the swimmers reach Gordon Bay at approximately 6:30 pm they will be joined by several members of the Victoria Masters Swim Club who will remain with them for the next 10 km. Cape and Simmons are both open water advocates and have been challenging teammates and friends to jump in the water with them. “Heading out for a workout in the lake with a group of swimmers makes me so happy,” says Cape. “I love that we are all together, enjoying this beautiful lake. It’s such a refreshing change from the pool.”

The rest of the night will be quiet, with just the two of them swimming down the lake escorted by their kayakers and safety boat throughout the night. “I’m excited and a bit afraid at the same time” says Simmons. “I’m not afraid to swim in the dark, and I trust my crew to guide me. I am, however, concerned about the cold. The lake gets colder as you swim west, and the air will get colder as darkness sets in. I am worried the cold will set-in. We have no way to warm ourselves until the sun is out the next day.”

If all goes according to plan, Cape and Simmons will reach the halfway mark at Heather Campground by early morning. About 3:00 am, they will turn around without touching the bottom or exiting the lake and start making their way back. Simmons’ English Channel relay teammates Jim Close and Bill Burton, both proficient cold water swimmers, will join them for a few kilometers, supporting them during the coldest part of the swim.

The two women will be on their own again for the next 20+ kilometers as they head back toward Gordon Bay and, eventually, Lakeview Park. Members of the local swimming and triathlon communities will join them for the last 10, 5, and final 2 km. A dozen or more friends and teammates will swim the last 2 kilometers with the women, including members of Victoria’s Special Olympic Swim team, a club Simmons helps coach. 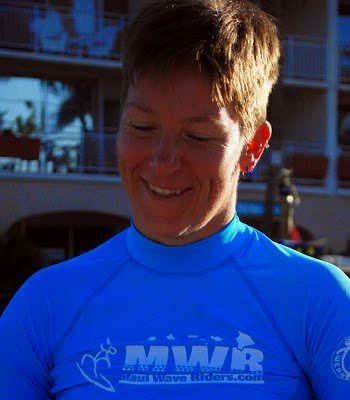 Cape [shown on left] has been studying the map, breaking it down into sections, to visualize her progress along the lake. “I am already thinking ahead to this part of the swim. I have been telling myself that it will feel really reassuring to be heading back towards the finish line. We will recognize points, and will hopefully feel good to be on the home stretch.”

The 34-year-old Cape started out her aquatic career slowly as did Simmons, but has been picking up steam every since. “I started swimming in 1991 as a summer swimmer and played water polo while studying at university.” But now during her travels with work, Cape has swum in pools all over Canada as swimming has been incorporated into her lifestyle. “Swimming is often the most normalizing part of my day, as it offers a whole-body work out in a quiet and calming environment.”

The joy that both Cape and Simmons exude is rubbing off on their families, friends, teammates, co-workers, and the Cowichan Lake community. During their training sessions at Thetis Lake, fellow swimmers often jump in and join them for a loop, and a growing list of paddlers and pace swimmers (see here) has offered to join in as supporters.