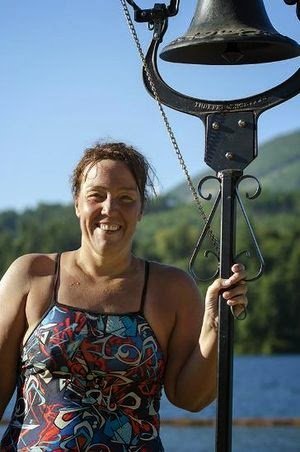 49-year-old Susan Simmons of Canada was diagnosed with Multiple Sclerosis nearly 20 years ago.

She took to swimming nine years ago to help manage the disease and it has been an upward journey the entire way.

It has not been tough because her disease is getting worse; it is getting tough because Simmons keeps swimming further and further. When she first started swimming, 20 laps of the pool led to 2- to 3-hour naps. But she continued to build herself up and kept on swimming.

Three years ago, she swam with an all-women’s relay team across the Strait of Georgia. Two years ago, she swam 10 km solo from West Vancouver to Kitsilano Beach in the Vancouver Open Water Swimming Association’s Bay Challenge. Last year, she swam 34 km across Cowichan Lake and also participated in an English Channel relay.

But she continues to escalate her swim distances with no end in sight.

Simmons could have viewed her serious medical condition with a fateful resignation, but she keeps expanding her dreams to unprecedented levels. With head-on determination, she has tackled multiple sclerosis with a tenacious strength of spirit and stunning stamina. With her friend and swim buddy Alex Cape at her side, she completed a 70 km over 32-hour swim in Cowichan Lake in British Columbia this year. But her journey is not over. Instead of remaining a person with debilitating multiple sclerosis, she has transformed herself to one of the world’s toughest endurance athletes and is now planning another unprecedented swim of 105 km in July 2015.

But nothing great is easy.

“The swim made me sleepy,” said Simmons of her 70 km swim. “I had to reset my stomach in the middle of the night with ginger ale. I couldn’t eat or drink anything and could barely swim. Did 10 strokes at a time and then sipped the ginger ale for about an hour and a half. It soon went away and I picked my pace back up. I still don’t know if that was a food thing, dizziness from the lights or a combination. Either way it gave me time to look at an incredible night sky filled with stars.

I fell asleep on the way twice for a brief moment the next morning, had hallucinations for the last 3 hours, and moderate hypothermia. I’ve also got some chafing gone wild on the left side of my neck and a sprained ankle from kicking – never saw that one coming.”

For more information and updates on her three-way crossing of Cowichan Lake, visit here and their Twitter account is here. 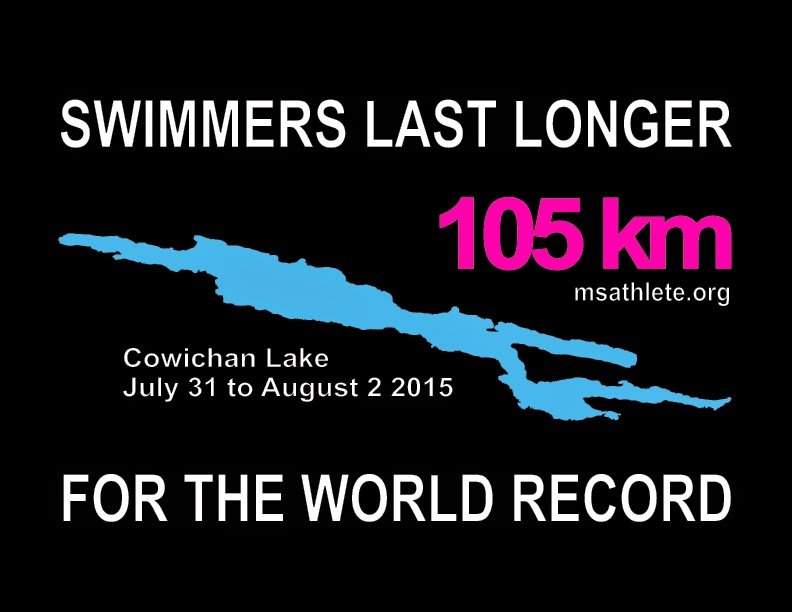