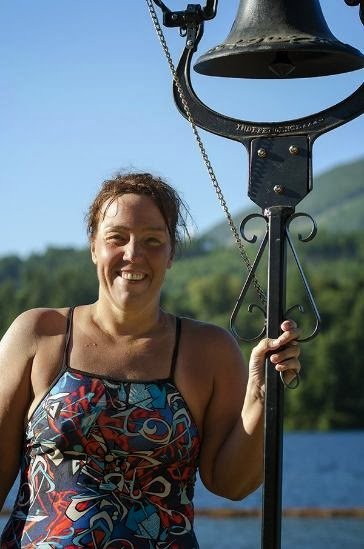 “I’ve often wondered if I would do less than I do if I didn’t have Multiple Sclerosis.”

She is doing plenty with what she has. After picking up swimming 8 years ago, she built up her swimming endurance year-by-year and completed the crossing of Cowichan Lake in 11 hours 45 minutes.

She explained to news reporter Diana Andrews of how swimming has been helpful, “I have discovered that for myself, swimming in particular helps me with my MS. I started eight years ago, and at that time, I was very unhealthy, very low-energy, a lot of fatigue and a lot of MS symptoms that were getting worse.”

But with swimming, those symptoms have gone away. “What it’s meant is I’m able to actively participate in the world. I do it for me to keep me healthy, but I want people to know there is the possibility (fitness) may work for them too — it’s not going to work for everyone, but for some people, it will.”