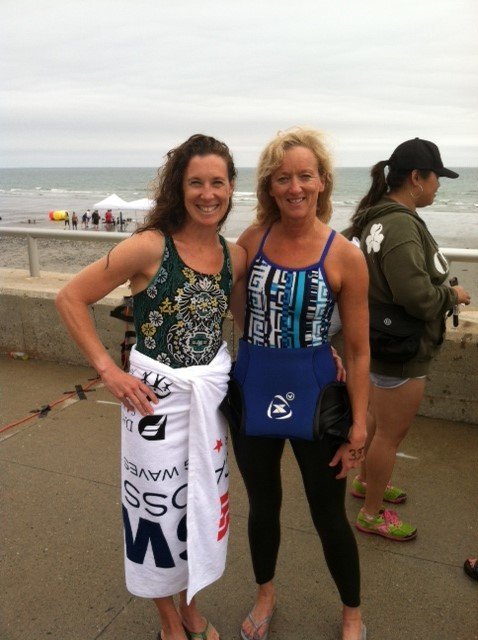 Drury Gallagher of Swim Free first popularized the name Swim Free Angel™ and swim angels in 2009. While the term had been used on and off previously in the 20th century, the use and identification of swim angels has really exploded in myriad events over the last several years from Africa to America.

A swim angel is an experienced swimmer or lifeguard who provides support shore-side or in the water at open water swimming events. They are especially useful for individuals who are nervous, newbies or inexperienced about swimming in open bodies of water.

Swim angels are individuals who volunteer their time and talents to help other swimmers less capable and confident in their abilities in open bodies of water. Sometimes, they start out by assisting others in the pool or standing nearby on the shore. Sometimes, they swim the entire distance with their partner or just stand guard in the first part of the swim until the swimmer gains his confidence.

Swim angels can also be volunteers with the Swim Free Angel™, an initiative by Swim Free, a New York-based non-profit organization. Under the Swim Free Angel™ program, newcomers of all ages and backgrounds are comforted by the swim angels in and around the water; they offer encouragement and coping mechanisms. The Swim Free Angels™ provide a smile and a shoulder in the shallows and in the depths at open water swimming events and triathlons.