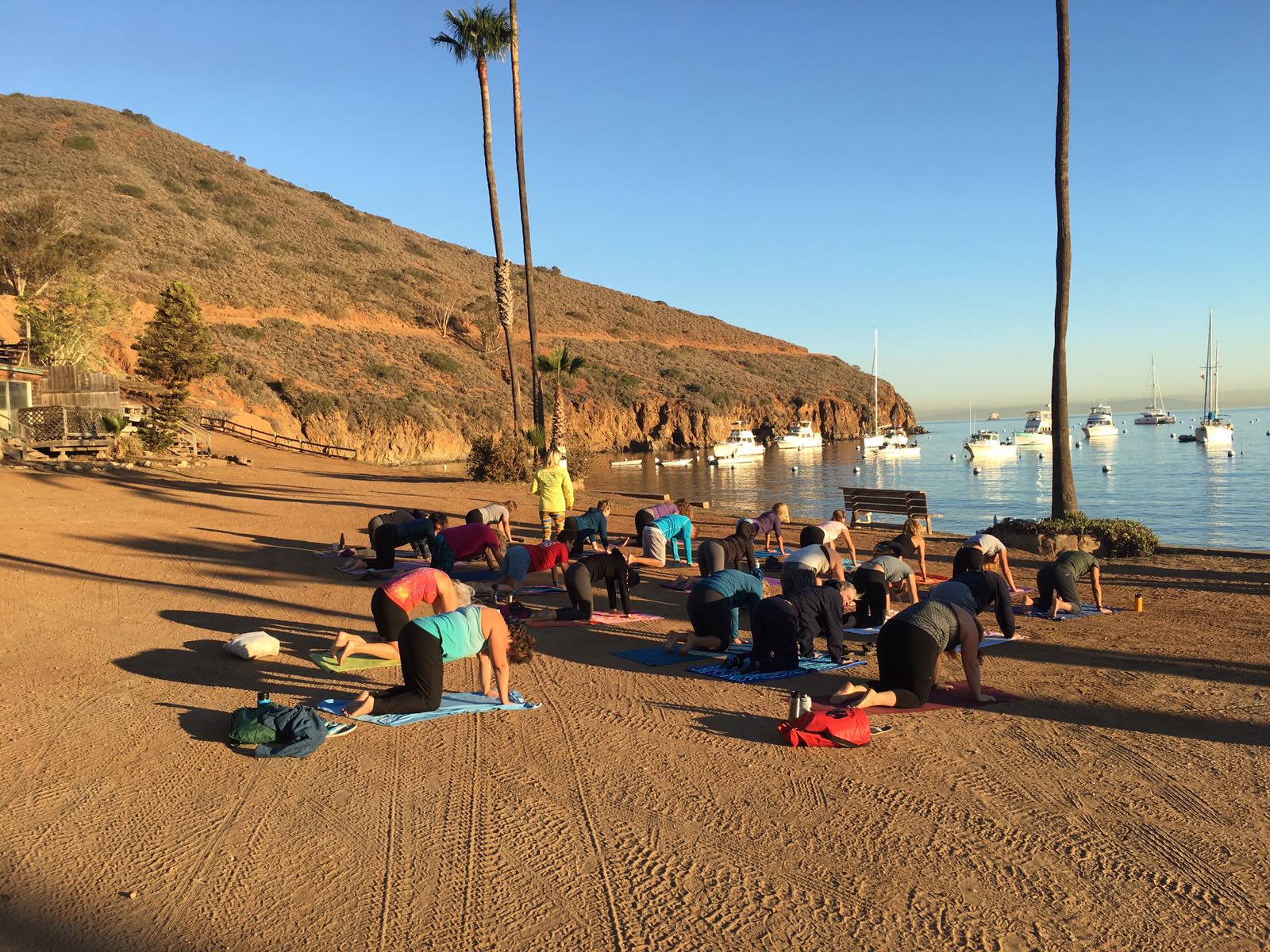 Yoga on the beach led by Asha Allen 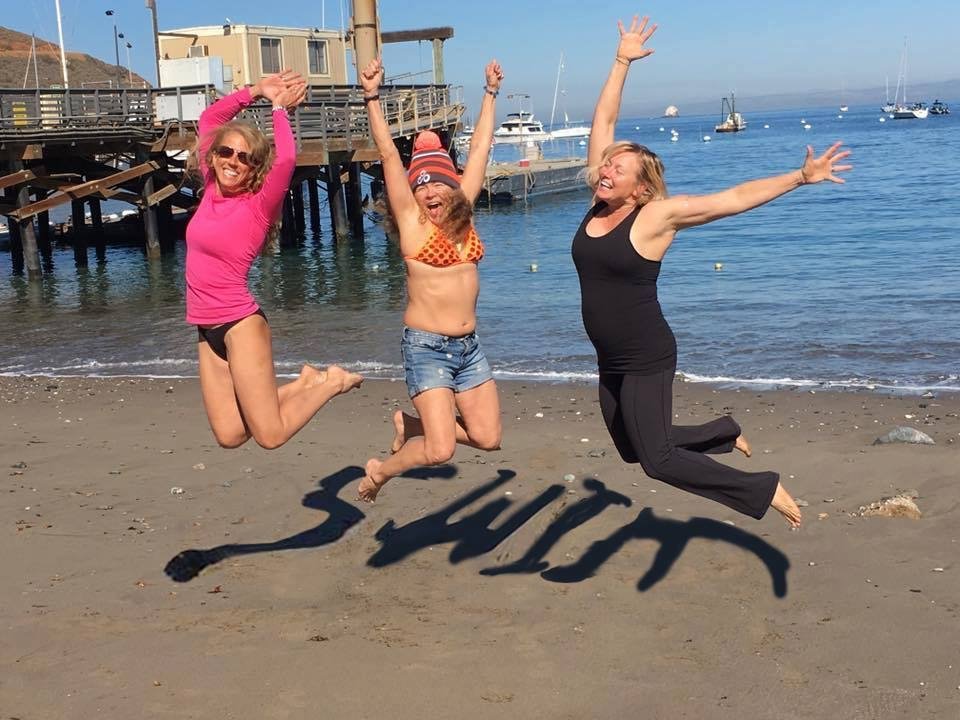 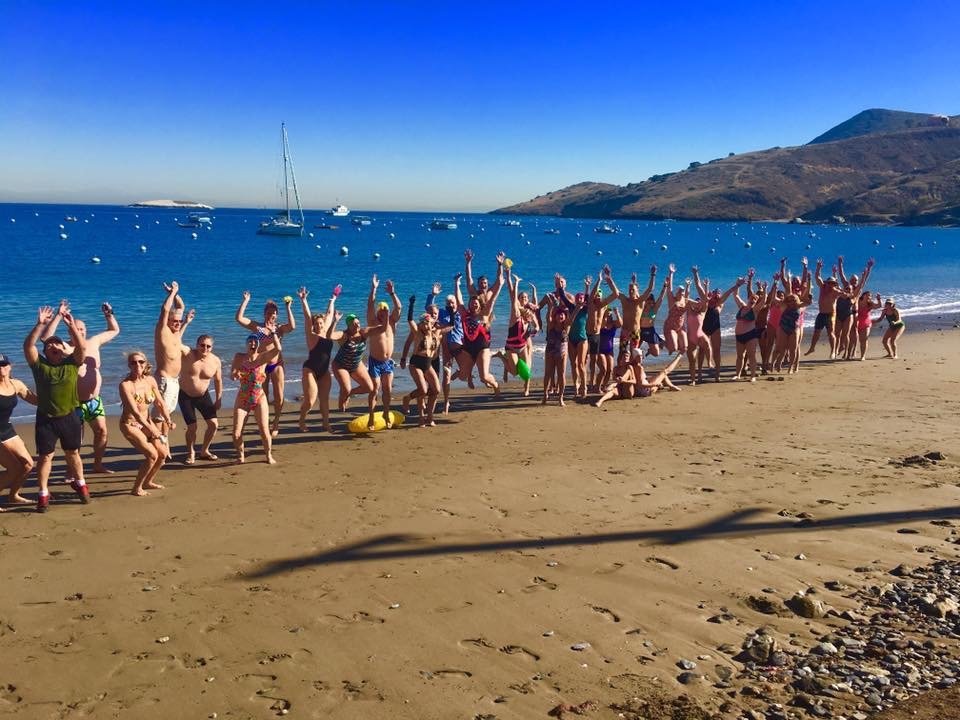 The popular camp is now in its fourth year and will be next held on November 9th – 12th.

“We will stay in the seasonal cabins at Two Harbors, a small village located on the west end of Santa Catalina Island. The overflow will reside at nearby Casa Santa Rosa, Casa Santa Cruz and the Banning House Lodge. This year’s event is limited to 60 campers.

Two Harbors is a small resort village with only one restaurant, one snack bar, and one general store. The village has about 150 permanent residents who live on the isthmus year-round. Two Harbors is named for the two harbors where most of our swimming will take place. Banning Harbor is on the leeward/northern side of the isthmus and Cat Harbor is located on the windward/southern side.

“Plan to explore the numerous coves and sea caves near our venue while viewing the abundant sea life. Campers may also enjoy land sports including yoga, hiking and mountain biking while possibly catching a glimpse of Catalina’s free-roaming buffalo population,” describes Zornig.

Fees of US$395 per person [until August 31st] include room, 3 dinners, 1 lunch, boat transportation to and from San Pedro, and insurance. Fees increase to US$475 after September 1st.

Zornig explains, “Our swim camps are a place for like-minded adults to come together and share their love of open water swimming. Unlike many adult swim camps, we do not offer stroke analysis or coaching. Campers simply swim as much or as little as they chose. Schedules are loosely written so that swimmers can workout, relax and socialize in a resort setting amongst peers. There are few requirements other than to practice safe swimming and have fun.

We plan our camps during months when many are looking for a break from the winter cold. The average air temperature is 67°F in Catalina in November. Water temperatures average 65°F with near-perfect conditions and clear visibility due to the protected location of each venue
.”

Other swim camps organized by Zornig include the Swim Camp Mexico in March 2018 and Swim Camp Panama also to be held in 2018.