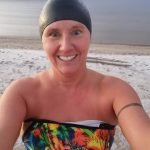 Anna-Carin Nordin (born 3 December 1970) is a 50-year-old marathon swimmer and channel swimmer from JÃttendal, Sweden who was the second person in history to complete the 7 channels of the Oceans Seven.

Quietly, diligently, and by herself, Anna-Carin Nordin travels the world in pursuit of the Oceans Seven. Neither the fastest nor the first, Nordin nevertheless pushes forward on her quest to cross the 6 major channels of the world. Without demands or an entourage, Nordin bounds from one channel to another, from one continent to another with a courage encased in a veneer of genuine sweetness. With the Catalina Channel and Tsugaru Channel completed this year, the Swedish heroine has 2 more swims to achieve her goal of the Oceans Seven. For her unpretentious road to the highest echelon of channel swimming, for her introverted, methodical approach to achieve her goals, for her heartfelt appreciation of everything and everyone involved in the sport, Anna-Carin Nordin is a worthy nominee for the 2012 World Open Water Swimming Woman of the Year.

Quietly and steady as she goes, Anna-Carin Nordin set the Oceans Seven goal for herself without fanfare and without a team. Crossing by crossing, country by country, continent by continent, Nordin swam the globe in pursuit of crossing the 6 mightiest channels in the world. As she did mega-miles in training and submerged herself in ice swims under 5°C, she was prepared for any cold-water, warm-water or rough-water conditions she would encounter. The unassuming and humble mother of one became the first woman to complete the Oceans Seven over dozens of much more well-known colleagues. For her quiet determination, for her simple approach to the sport, for her achievement of the Oceans Seven, Anna-Carin Nordin is a worthy nominee for the 2014 World Open Water Swimming Woman of the Year.

Anna-Carin Nordin, the first woman in history to complete the Oceans Seven, has achieved a large number of marathon swims and extreme swims to her credit. The 49-year-old Swedish Honor Swimmer in the International Marathon Swimming Hall of Fame continues to swim and smile, making friends all over the world. But even with more successful swims and additional exposure, Nordin remains humble, soft-spoken, and quietly ambitious. This year, she set off on another swimming dream with her typically small crew: an unprecedented stage swim in the Baltic Sea around Öland, the second largest island in her native Sweden. 333 km later, after a cumulative 117 hours 5 minutes in the water over 32 separate stages, she finished on Färjestaden right where she started 22 days previously. She swam the last 83 km by herself, without an escort kayaker with her father Karl-Erik Nordin coordinating her ground support. For attempting and completing the record-setting Öland Circumnavigation Stage Swim in her typically understated but triumphant manner, for adding another swim to her prolific open water swimming career with a deep passion and humble appreciation for the sport, and for carrying on with her ambassadorial role as an icon in the sport, Anna-Carin Nordin is a worthy nominee for the 2020 World Open Water Swimming Women of the Year.​

In June 2011, she attended one of the Glen Christiansen swimming camps in Tenerife. She trained up to 100,000 meters per week and every third day, she did a 6-8 hour ocean swim.

She was named to the list of World’s 50 Most Adventurous Open Water Women by the World Open Water Swimming Association in 2015.

She was a member of the Fast and Frozen open water swimming relay that accomplished an unprecedented 2-way North Channel crossing from Ireland to Scotland to Ireland in 29 hours 56 minutes. They left the shore of Ireland on 26 July 2015 at 6:52 am and completed the two-way relay swim at 1:49 pm on 28 July 2015, escorted by Pádraig Mallon‘s Infinity Channel Swimming. Its members included Henri Kaarma from Estonia, Ryan Stramrood from South Africa, Anna Carin-Nordin from Sweden, Patrick Corcoran from Ireland, Zdenek Thalmika from the Czech Republic, and Elina Makïnen from Finland. It is nominated for the 2015 World Open Water Swimming Performance of the Year by the World Open Water Swimming Association.

From The Isle of Man To Ireland