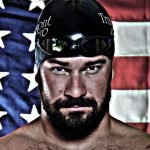 Darren Miller is an American motivational speaker, race director, and marathon swimmer from Pittsburgh, Pennsylvania, U.S.A. who became the second man, second American, and fourth person overall to achieve the Oceans Seven. Miller was the first swimmer in history to achieve the feat on all first attempts. Darren Miller was named one of the 101 Movers And Shakers In The Open Water Swimming World by the Daily News of Open Water Swimming for 2013 and received a nomination for the 2013 World Open Water Swimming Man of the Year Award. Miller, along with Sarah Thomas, won the Barra Award in 2013 by voting members of the Marathon Swimmers Forum. He is a founding board member of the U.S. Winter Swimming Association that sanctions the first Winter Swimming Championship in North America and a lifetime member of the Santa Barbara Channel Swimming Association.

Miller has organized and hosted the Three Rivers Marathon Swim, a 30 km marathon swim since 2014. The course includes a 10 km marathon swim in the Ohio River, Allegheny River, and Monongahela Rivers. Information and past results available through Miller’s website.

Miller is swimming to benefit his non-profit, Team Forever and the Forever Fund, a fund he co-founded that aids families in their struggle to afford the costs associated with infant cardiothoracic surgery at the UPMC Children’s Hospital of Pittsburgh. Charitable donations may be made at Miller’s website. Miller is fully-sponsored in his journey by Trustmont Financial Group, therefore allowing 100% of all donations to go back to the Forever Fund.

Miller is also a professional speaker, and raises additional money for the Forever Fund through speaking to corporate events, university and other organizations. His motto, “Every Breath A Gift”, is the motivating force behind his desire to push the boundaries of what is possible, and inspire the youth of our nation to challenge themselves to see what they can achieve.

Forever (Forever Fund & Team Forever) is a song by the Dropkick Murphys which has always reminded Miller of his grandmother – someone who inspires Miller to live the best life he can. She taught Miller that success has nothing to do with one’s pocketbook, but by how you treat someone who can do you absolutely no good. Miller have realized that life is short through the loss of several friends due to drugs and violence. We doesn’t have time to waste because we never know when the Lord will call us home!”