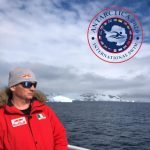 The Southern Ocean is at the bottom of the world surrounding the continent of Antarctica. Inhospitable to humans, but remarkably, Ger Kennedy organized a series of ice swims accessible around the ice-covered tundra to some of the most hardened ice swimmers on the planet.

From Ushuaia Argentina, the Polar Swimming Quest set off by ship and stopped in several locations over a few weeks reaching there most southerly point 66.6S.