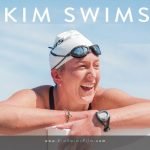 Kimberley Chambers is a 41-year-old open water swimmer from New Zealand living in the San Francisco Bay area. A former ballerina, she is a member of the Dolphin Club of San Francisco, the South End Rowing Club, North Bay Aquatics, and the Night Train Swimmers. The focus of her solo swims is to raise awareness and funds for the following causes: Warrior Canine Connection, Team Theo and The Free Morgan Foundation. She was nominated for the Halberg Awards’ High Performance Sport New Zealand Sportswoman of the Year in 2015 and is one of the few people in history who has completed the Oceans Seven.

Chambers is also a member of the Night Train Swimmers, and a successful relay team that swam 26.4 nautical miles from the Golden Gate Bridge to the Farallon Islands off the coast of northern California, U.S.A. on 20 May 2011 in 14:45:08 with Phil Cutti, Darrin Connolly, David Holscher, Vito Bialla and John Mathews.

Chambers is a classically trained ballerina. She began dancing at the age of 2 years old and over the next 15 years practiced under the Royal Academy of Dance, competing and performing throughout New Zealand. Although she no longer dances she is qualified to teach ballet. While studying at the University of California at Berkeley, Chambers was recruited to the women’s freshman crew team. Chambers has been swimming for less than 4 years, discovering her passion for the sport while rehabilitating a life-threatening leg injury.

“Kimberley Chambers was 30 minutes from having her leg amputated after a traumatic fall down a flight of stairs. Nearly all hope had evaporated in the hospital, but destiny ultimately intervened. After her leg was saved, she took up swimming in order to avoid being disabled and unable to walk. After a difficult two-year rehabilitation period, she learned to love swimming and those in the sport. This year, she has blossomed in ways she could not have imagined before. She completed the Strait of Gibraltar in May, the Catalina Channel in July, and the English Channel in September en route towards her goal of achieving the Oceans Seven. For her optimistic view of life, for her deep sense of appreciation of her teammates and supporters, for her utter joy in the discovery of her vast potential, Kimberley Chambers is a worthy nominee for the 2013 World Open Water Swimming Woman of the Year.”

“From a near amputation to this year’s completion of the Oceans Seven, few swimmers in history have come back from such depths to stand atop the marathon swimming world. Kimberley Chambers, a former ballerina whose leg was minutes from being amputated, took to swimming for rehabilitation – not for marathon swimming glory. But she needed to prove to herself and her doctors that she could recover from a terrible leg injury by completing 7 difficult channels around the world including a jellyfish-strewn North Channel crossing where she went into toxic shock. After years of struggle and sacrifice, the Kiwi living in San Francisco has transformed mindsets on what is truly possible in the open water. Personable, humble and profoundly eloquent, she is a role model in her rehabilitation and monumental swimming achievements. For her goal-setting mentality, for her laughter and motivational spirit, for her genuine willingness to share everything she has experienced along the way, Kimberley Chambers is a worthy nominee for the 2014 World Open Water Swimming Woman of the Year.”

Chambers is a member of the Night Train Swimmers team that attempted the SF to SB Relay, the world’s longest non-stop ocean relay swim attempt (339 miles or 545.4km) along the California coast from San Francisco to Santa Barbara together with Phil Cutti, Patti Bauernfeind, Dave Holscher, Joe Locke, Zack Jirkovsky, and crew Patrick Horn and Captain Vito Bialla between 23-28 September 2012. It was halted after 6 days due to bloom after bloom of venomous jellyfish.

Chambers successfully completed the 21.25 mile crossing of the length of Lake Tahoe on 5 August 2012 in 15 hours 30 minutes and 28 seconds to become the first New Zealander and the 26th person to complete the swim.

On 5 March 2012, Chambers made a successful solo crossing of the Cook Strait. Swimming from the South Island to the North Island of New Zealand, Chambers completed the swim in 8 hours 26 minutes.

Chambers completed a 19 hour 27 minute crossing of the Kaiwi Channel on 9 November 2012. She left Kalua Koi on Molokai Island at 8:23 pm the previous night and arrived at China Walls on Oahu at 3:50 pm on 9 November 2012 with over 50 Portuguese man o war stings under the guidance of Captain Matt Buckman.

Relay swims to the Farallon Islands

She was a member of the unprecedented attempt at a two-way Farallon relay, a 6-person 60-mile (95.6 km) relay from the Golden Gate Bridge to the Farallon Islands in the Pacific Ocean off the coast of San Francisco Bay, on 25 April 2015. They stopped on a one-way crossing at the buoy located at Fisherman’s Cove at the South Farallon Island after 29.68 miles in 14 hours 9 minutes in rough seas. The swim was sanctioned by the Farallon Islands Swimming Association. Members included Emily Kreger, Patti Bauernfeind, Simon Dominguez, Kim Chambers, Ashley Horne, Dave Holscher, Kate Webber, Captain Vito Bialla, co-captain Patrick Horn, and David Ogden, M.D.

She was named to the list of World’s 50 Most Adventurous Open Water Women by the World Open Water Swimming Association in 2015.

She is a member of the Night Train 300 (or NT300) is an attempt by the Night Train Swimmers to swim 300 miles (482.2 km) non-stop as a six-person open water swimming relay in San Francisco Bay. The charity event that will begin on 6 September 2015 is a fundraiser for Arthur Renowitzky walk again after being paralyzed by a gun shot wound to his spine, they will attempt to set the distance record for a 6-person open water swimming relay. Adhering to standard English Channel relay rules, NT300 will swim continuously in 1-hour individual rotations for an estimated 5 days in an attempt to break the existing distance record [currently held a team from India, called The Sea Hawks that swam for 269 miles (433 km) over 6 days off the Konkan Coast in western India). They will swim in San Francisco Bay as far south as the Giants Stadium and as far north as Benicia with the goal is raise US$50,000 to be able to help make Arthur Renowitzky walk again by outfitting him with a exoskeleton REWALK suit. Members included Grace van der Byl, Dave Holscher, Kimberley Chambers, Adam Eilath, Ashley Horne, and Vito Bialla.

Chambers’ 2015 World Open Water Swimming Performance of the Year nomination reads as follows: Kimberley Chambers (New Zealand) Farallon Freestyler Kimberley Chambers added another feat to her impressive, but unlikely, swimming resume when she became the first woman to swim from the Farallon Islands to the Golden Gate Bridge. The 38-year-old former ballerina’s 30-mile tenacious solo swim took an agonizing 17 hours 12 minutes that ended with Chambers in the hospital. For her drive to overcome severe dehydration and push her body to the deep abyss of discomfort and pain, for being the first women to tackle arguably the world’s most difficult channels, and for her unfailing courage despite the presence of the Great White Sharks, Kimberley Chambers’ Farallon Islands swim is a worthy nominee for the 2015 World Open Water Swimming Performance of the Year.

Kim Swims is a documentary film about Kimberley Chambers improbable path to become one of the world’s most accomplished swimmers. The film was funded by 435 backers on Kickstarter who pledged US$36,379 to help bring the project to life.

Chambers attempted the longest solo swim ever recorded in California, a 93-mile swim down the Sacramento River from Sacramento to San Francisco starting on 9 September 2016.

Swims with Sharks Before Breakfast

Chambers is the ambassador and event organiser for the 7.9 km 3 hour 3 minute Pan-American Colibrí Swim, a cross-border swim and charity swim in the Pacific Ocean from Imperial Beach near San Diego, California, USA to Playas de Tijuana in Tijuana, Mexico held on 5 May 2017.

She will participate in the Great Shark Swim, a 100 km charity swim organised by Madswimmer along the fast Agulhas Current in South Africa with an estimated finish time of 12+ hours along the KwaZulu Natal Coast. The primary swim window is 2-8 December 2017 (weather dependent).

Lucas Rivet produced a sensational hit with his 33-minute documentary