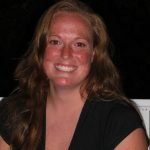 Macy was the third person in history to achieve the Oceans Seven and complete all seven of the world's major channels:
Michelle Macy is a 40-year-old American marathon swimmer from Oregon who is considered to be one of the world’s most accomplished marathon swimmers who began swimming at a young age and was a competitive swimmer through college. She created the Stillwater 8.

Macy was the third person in history to achieve the Oceans Seven and complete all seven of the world’s major channels:

Macy was nominated for the 2014 World Open Water Swimming Woman of the Year. Her nomination reads: Her love of the sport knows no limits, she serves as support crew as readily as she dives in the water for her own marathon swims. Michelle Macy was the first American and third person overall to achieve the Oceans Seven. The full-time Nike employee takes enough time out of her busy work schedule to become one of the most prolific and accomplished open water swimmers in contemporary times. Without sponsors and without hype, the friendly, thoughtful, seriously-minded swimmer moves about the globe to cross channels and help others in their own quests. For her world record time across the North Channel, for her achievement of the Oceans Seven, for her joyful willingness to crew for other swimmers around the world, Michelle Macy is a worthy nominee for the 2014 World Open Water Swimming Woman of the Year.