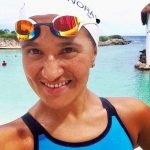 Toledano was nominated for the 2019 World Open Water Swimming Woman of the Year award as follows: Nora Toledano Cadena has long been involved in open water swimming, both domestically in Mexico and internationally in some of the most difficult channels and professional marathon swims around the world. She was the first Mexican inducted in the International Marathon Swimming Hall of Fame and has inspired, mentored and coached innumerable Mexican and Latin American swimmers of all ages for decades. This year, she coached 21 major international open water swimming crossings, all of which were completed successfully. Her speeches and her book – A cada brazada: el azul interminable (Each Stroke: Endless Blue) – describe her channel crossings and how lessons from those challenges can be applied in real life. After all her successes and occasional obstacles, she crossed the 23 km Cook Strait in 9 hours 54 minutes to complete the Oceans Seven at the age of 49. For crossing the English Channel (6 times including a two-way swim), Catalina Channel, Molokai Channel, Strait of Gibraltar, Tsugaru Channel, North Channel, Cook Strait to achieve the Oceans Seven, for continuing to lead and advise the open water swimming community in Mexico, and for remaining a friendly, personable, humble, inspirational icon in the sport after nearly two decades since her first English Channel crossing, Nora Toledano Cadena is a worthy nominee for the 2019 World Open Water Swimming Woman of the Year.