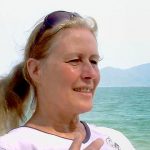 Vasanti Niemz (born 8 December 1956) is an open water swimmer and endurance athlete living in Heidelberg, Germany. A member of the International Sri Chinmoy Marathon Team, she has been a vegetarian since 1981 who is a member of the Half Century Club.

Vasanti has been part of the “Sri Chinmoy Oneness-Home Peace Run” founded by Sri Chinmoy since 1987 (called “World Harmony Run” between 2001 and 2012) as a regional organizer and runner in Germany, Switzerland, Great Britain, Italy, Croatia, Japan, Vietnam, Tanzania, Indonesia, USA and other countries and carried the Peace Torch on her English Channel relay 2009, solo 2010, Gibraltar strait swim 2012 and to Mount Kilimanjaro in 2013 as a dedication of these events to peace and international friendship.