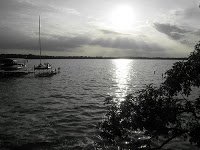 Online registration for the Swim For Kid’s Sake, a competitive charity event with five different events, is now available.

Lake Maxinkuckee in Culver, Indiana will be site for the new June 12th event that includes a 1/2 mile, 1 mile, 5K, 10K and 4-Mile Relay and a pre-race clinic led by 1998 world 5K champion Erica Rose.

Lake Maxinkuckee, more commonly known for its ice fishing rather than open water swimming, will warm up to over well over 20°C by race time. As one of the few 5K and 10K races in the Midwest, the Swim For Kid’s Sake is drawing strong interest from open water swimmers anxious to see what they can do for these distances. Wetsuits are acceptable, but are a separate division than the traditionalists.

“We have been getting a lot of interest from people throughout the Midwest, including a lot of people from Chicago. We have a 5K race that is popular among triathletes and shorter races for the young swimmers and less experienced. We also have 4-mile relay that you can do with 2-4 swimmers and a pre-race dinner at Culver Cove Resort the night before. Proceeds will benefit the Riley Hospital for Children and the PLGA Foundation,,” said race director Mallory Mead who has her own tough schedule to think about after the race: the 27K Marathon of Toroneos Gulf in Greece in July followed by a 21-mile Catalina Channel and a 26-mile Molokai Channel attempts in August.

Photo by Dave and Gabie.