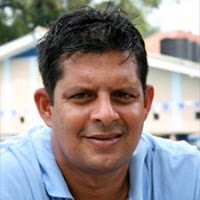 Three-time Olympic swimmer Julian Bolling is giving back to the sport through the organization of two open water swims in Sri Lanka and a Swim Lanka project.

After a tsunami in 2005, its initial aim was to give children who live near the coastal regions “the chance to overcome their fear of water and learn to swim. “Many lives lost in the tsunami would have been saved if everyone had been able to swim, but most don’t know how.”

Swimming coaches are drawn from the local community, trained at Julian’s Colombo Academy and given permanent jobs with Swim Lanka. The schools, temples, mosques and churches in the vicinity are visited and with the help of the priest or teacher application forms are distributed to suitable children, ages between 4 and 11. Courses run for about 5 weeks and include 10 classes per child in groups of 6 to effectively address their children’s fears and misconceptions of swimming. The courses are held at the following locations: Katugoda, Unawatuna, Talpe, Habaraduwa, Goviyapana, Pitiwella, Ovakanda (Rathgama) and Dadalla.