Swim Near The Rocks

El Arco de Cabo San Lucas in Mexico is a distinctive rock formation at the tip of Cabo San Lucas at the southern end of Mexico’s Baja California Peninsula.

The Giant’s Causeway (Clochán na bhFómharach) is an area of 40,000 interlocking basalt columns, the result of an ancient volcanic eruption, in County Antrim on the northeast coast of Northern Ireland. A World Heritage Site and a National Nature Reserve, the Giant’s Causeway is one of the greatest natural wonders in the United Kingdom.

The Externsteine is a distinctive rock formation located in the Teutoburger Wald region of northwestern Germany.

The formation consists of several tall, narrow columns of rock which rise abruptly from the surrounding wooded hills. The name probably means “stones of the Egge”.

Preikestolen or Prekestolen, is also known as Preacher’s Pulpit or Pulpit Rock, and by the old local name Hyvlatonnå.

Preikestolen is a massive cliff 604 metres (1,982 feet) above Lysefjorden, opposite the Kjerag plateau, in Forsand, Norway.

The top of the cliff, approximately 25 by 25 metres square is a famous tourist attraction in Norway. 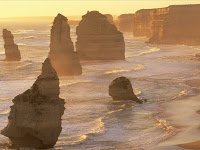 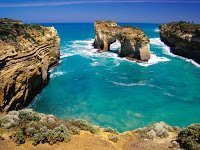 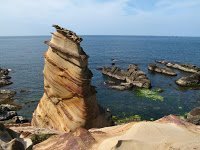 Nanya Rock are fantastic rock formations and sea-eroded coral shore in Taiwan. The coastline epitomizes the beauty of weathering and wave action on stone.

Nanya was created by the weathering of the sandstone that lines the shore. The oxidation of iron ore within the striations of the stone has given it a beautiful striped pattern.

Percé Rock is one of the largest natural arches in the world. It rises sheer from the Gulf of St. Lawrence in Quebec near the village of Percé, Canada.

It is a massive limestone stack 433 metres long, 90 metres wide and 88 metres at its highest point. 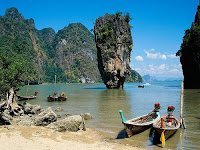 Koh Tapu is one of the most renowned islands in Thailand, located at Phang Nga Bay in Phuket.

Featured in the 1974 Bond film “The Man with the Golden Gun”, Koh Tapu soon became known as known as James Bond Island and started to attract visitors from all over the world.

Moeraki Boulders on Koekohe Beach on the Otago Coast on South Island in New Zealand have been eroded by wave action from the cliffs of soft, black mudstone.

They originally formed on the sea floor when the mudstone was accumulating during the early Tertiary period some 60 million years ago.

It was formed by Pyramid Dam on Piru Creek, near Castaic, California.

More photos by San Francisco Axis of the area here. 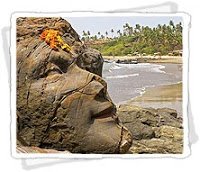 Goa is on the western coast of India and the site of the India International Triathlon where the weather is especially pleasant and sunny from November to March.

Ponta da Piedade in Lagos is a jewel of the Portuguese southern coast.