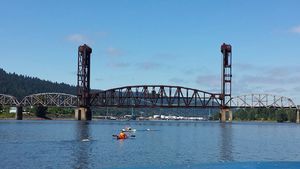 Race director Marisa Frieder saw the change in the ambiance of the event. “We seem to have hit that critical point in numbers. The swimmers made this year’s field a real presence in the river, rather than simply being some isolated swimmers.

I looked up at one point at the finish to see a line of swimmers as far as I could see, all coming in toward the finish
.”

Yesterday’s 11-mile race under all 11 of Portland’s picturesque bridges started out under gloomy skies that gave way to sparkling sun. “The swimmers made for an undeniable presence in the middle of the city. It was such an amazing sight, I wept with joy.”

The community around the event is starting to grow too. “An army of volunteers watched over the swimmers on water and land, and the City of Portland halted work on one bridge to allow the swimmers to pass,” recalled Frieder.

The relay team led by Jamie Proffitt took first place overall with a new course record of 3 hours 42 minutes. Returning swimmer Johnny van Velthuyzen took first place for the men in 4 hours 11 minutes. Laurie Cyr took first place for women with a powerful swim in 4 hours 34 minutes. Swimmers from Portland and beyond, including annual participant Bob Needham, attempted the swim simply to test themselves. “With a 100% finish rate, they all passed the test with flying colors,” explained Friedman with pride.

This year’s swim also marked the debut of a tracking app for iPhone and Android, developed to monitor the position of each swimmer’s escort kayaker. Spectators at the finish were able to watch the field approaching and check individual swimmers’ positions with the apps. In a test that hints at a more technologically advanced future, a public viewing feature still in development allowed one group of swimmers’ friends to watch their progress from a bar in Tacoma, Washington. The organizers plan to continue development of the app in the next year and make it available to other race organizers in 2014.

“After 2 years of growth, the 2013 Portland Bridge Swim has developed into a mature and exciting event for swimmers looking for a great swim and a great destination,” summed up Friedman.