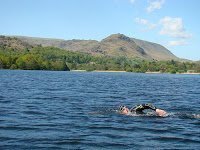 Dan Martin will cross the Atlantic Ocean the hard way – and many say, the right way – no wetsuit, no floating on currents and starting every swim on every new day from the exact same point which he finished the previous day.

In a show of solidarity, the global marathon swimming community is coming to Dan’s aid.

For example, Ned Denison of the Swim Ireland and Sally Minty-Gravett of the Jersey Long Distance Swimming Club are planning separate, but simultaneous, community swims in support with Dan’s Global Triathlon and its charities. In Cork, Ireland, Ned will join over 100 swimmers in the water at exactly the same time (Saturday May 8th 2010 on 4:15 EST or 9:15 am in Ireland) in a charity SWIM WITH DAN effort.

The worldwide support of Dan‘s swim seems to be picking up steam.