SwimFree During The Super Bowl 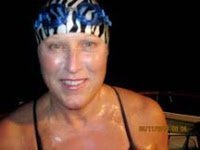 As America settled into its sofas, couches, bars and restaurants in front of the television for its annual sporting spectacle, the Super Bowl, Dave Smith, Barbara Held (shown on left), Cindy Walsh and Kevin Anderson will swim in 55°F (13°C) water in La Jolla, California to raise money for the New York-based SwimFree, the Ovarian Cancer Research Fund and the Alisa Ann Ruch Burn Foundation.

“I will swim in the open ocean the entire time the game is being played, even during the commercials. I will get out at half time to refill my water bottles and try to warm up. When halftime is over I will re-enter the water again and swim through darkness until the game is over. I will have a GPS receiver under by swim cap to record my total distance swum.”