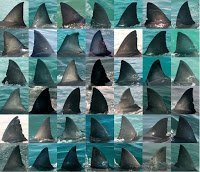 Ocean.com reported on how scientists from the University of Bristol are collaborating with shark researchers to build an international visual biometrics database of Great White Sharks.

The computer identification system will store images of the White Shark’s unique dorsal fin to help international shark groups recognize and track individual species, providing them with a better insight into their behavior and how to protect them.

Dr Tilo Burghardt said: “We are developing the software for a system that will be able to automatically recognize features of White Shark dorsal fins using ‘computer vision’ technology, and then archive the animal information along with their IDs. We hope it will be usable within two years, with members of the public able to participate.”

There is tremendous value of this emerging database to the global open water swimming community. Based on the shark sightings that happen during marathon swims (e.g., when Quinn Carver, Bill Goding, Brian Denaro and Jen Schumacher swam 17 miles from Kauai to Niihau swam last week between Kauai and Niihau) and occasionally in training, the ocean swimming community has its own share of shark encounters.

English Channel and Catalina Channel swimmer Anne Cleveland reported this summer in California, “There have been lots more unofficial sightings than that lately. It sure keeps the crowds down. This afternoon, it was just me and the landlord. Last week, a helicopter pilot saw a shark over 15 feet just off Scripps pier [in La Jolla, California].”

Molokai Channel, English Channel and Catalina Channel swimmer Michael Miller who was recently training off Southern California also reported, “I saw a big gray fish today, out by the quarter-mile buoy. Well, I saw PART of a big fish, as it dove down into kelp bed. What I caught was the back-end one-third of the fish with its unmistakeable tail and white/gray markings on its side. I cannot say for sure what it was, but it was big. Later, while coming in, I did not know of an abundance of sand sharks, must have been 25 or 30, swimming with the people, cool as hell.”