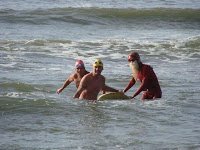 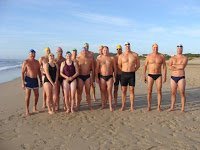 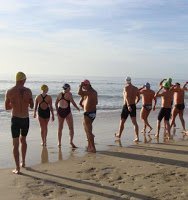 The 4 km BloodScan Jeffreys Bay Swim Challenge was got to a cold start in its inaugural run as part of the BloodScan Surf Challenge.

Jeffreys Bay, home of Supertubes, one of the best surf breaks in the world, is the venue for 20 swimmers who will attempt a 4 km swim from Kitchen Windows, long the coast down to Supertubes and then onto Lower Point today.

Brenton Williams described the swim, “It was demanding because the unexpected water temperatures caught swimmers by surprise today with 14°C (57°F) water after negotiating rocks to get back to the finish on the beach. The biggest risk changed from the danger of being caught by sets of waves at Supertubes, to the risk of swimmers getting cold in the water..

A small swell and a light cross wind greeted the swimmers as they entered the water. Matt Stow from Cape Town said, “It was a classic swim. I really enjoyed the format. Going past Supertubes was really special. I will be back next year for sure.”

Ralph West, who was treated for hyperthermia, recalled, “It was really cold at the start. I battled to breathe at first. Then I settled down, but got really cold towards the end. I don’t really remember much about the last 800 meters of the swim, but I am stoked I managed to finish.”

Lewis Khoury, the event sponsor, admitted that he was blown away by the commitment of the open water swimmers. “Watching some of the swimmers being carried up the beach to the ambulance was mind-blowing. These guys are hard-core and we are proud to be the sponsor of the Bloodscan Jeffreys Bay Swim Challenge..”

Next year the event will be opened to 25 swimmers with slots being automatically allotted to the 13 swimmers who pioneered the swim this year. The results of the 2012 BloodScan Jeffreys Bay Swim Challenge: