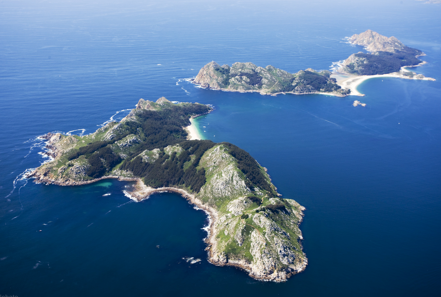 La Batalla de Rande a Nado is back for its fifth edition on July 4th 2015 where 43 swimmers will race along the Ria de Vigo on the Atlantic coast of Galicia in northwestern Spain.

The 27 km swim commemorates a famous naval battle that took place in 1702 in the channel. It starts between the islands of Cíes de Vigo at the mouth of Ria de Vigo and finishes at San Simón islands. It challenges swimmers with a combination of tough currents, cold water and rough water. 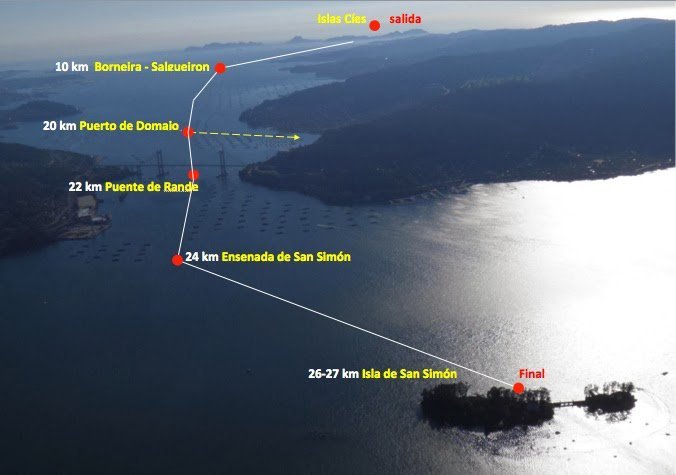 The Asociación Deportiva Islas Cíes – San Simón presents a unique event for those either with and without wetsuits.

The event has three main sections where the swimmers are battered about with currents and tidal flows in water no warmer than 19ºC: the first part is 10 km, the second stretch is 12 km, and the third section is when the swimmers finally enter the San Simón inlet in the final race to reach the former prison island.

Organizer Loli Paz expects the water temperature is be in the range of 15-19ºC. Wetsuits are recommended, although four non-wetsuit bioprene swimmers are among the 43 athletes who will swim to San Simón.

For 2015 race format is different from the past editions.

The field is split among three groups for the first 20-24 km. Then, the Batalla de Rande will become a race for the last 3 – 7 km depending on race day conditions.

Swimmers will be assigned to a group according to their ability. Groups will be escorted by boats, kayaks, and inflatable rafts with 3 physicians, 4 paramedics, 3 lifeguards, 1 diver, with evacuation points en route.

“This event is set within a beautiful marine environment that makes us confident in its future growth. It is also an excellent test to attempt an English Channel crossing,” says Paz. “The event takes its name from a naval engagement fought in 1702: the Battle of Rande or the Battle of Vigo Bay where Admiral of the Fleet Sir George Rooke after receiving news that the Spanish treasure fleet from America, laden with silver and merchandise, had entered Vigo Bay. The English naval commander immediately set sail to attack the treasure ships. 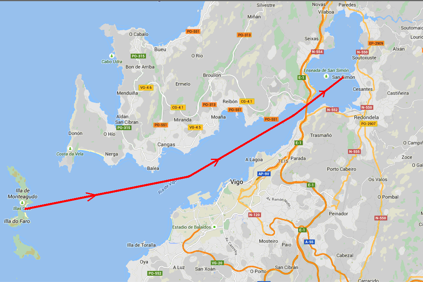 The engagement was a success, sort of. The French escort fleet and the Spanish galleons and transports were either captured or destroyed. Yet because most of the treasure had been off-loaded before the attack, capturing the bulk of the silver cargo had eluded Rooke. Some people believe tons of silver are still on the ocean floor
.”

Can the swimmers see that silver in the bay en route to the finish?