Swimming 1400K – And More – As An Expression Of International Peace 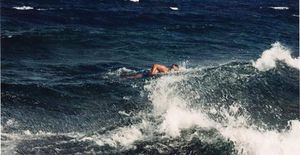 TUNISIA. Day by day, kilometer by kilometer, beach by beach, Nejib Belhedi is making his way 1,400 kilometers along the entire coast of his native Tunisia.

Nejib‘s stage swim, called the 1400K Swim Across Tunisia, is a lofty goal. As he works his way across the country, support from people of all backgrounds is picking up and the media attention is growing.

“I want peace, tolerance and love for other to to defeat terrorism and fanaticism.

This is especially symbolic and important during this September 11th memorial anniversary,” said the former Lt.Colonel in the Tunisian Army. “I will meet soon Libyan swimmer Said Algezawi in Bibane Lake as one stage of the 1400K Swim Across Tunisia. This stage is the nearest and safest area to the Libyan boundary and will complete the Djerba shore to Boughrara Lake coast stage.

As I land on Ben Guerdane beach coming from Bibane, Said will meet me and join together to show and exchange our country’s flags. The exchange will be covered by Tunisian TV 1.”

Said is a member of an English Channel relay in 2010. “Our act expresses the friendship and solidarity between Tunisian and Libyan peoples during these revolutions. The consolidation of our common destiny and gives us hope to see the the democratic process through. Said will relay with his 9 English relay team members along the Libyan coast. Together, we are hopeful this marathon will continue and be extended to Egypt by Egyptian swimmers. As the momentum continues, we dream that the relay will extend later to Syria when this country will be free.

Then, why not have Israeli and Palestine swimmers help extend this relay?”

The courageous and visionary Nejib forges on day by day, kilometer by kilometer, beach by beach – remarkable during this time of political turmoil.