Swimming Alone Without The Hawthorne Effect 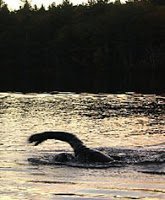 Many open water swimmers are self-motivated, either by nature or necessity. They head towards the coast or shoreline alone, stretch a bit and swim along the shoreline, out to certain points, around a pier or towards a jetty.

There are others, either by choice or opportunity, who train with a swim buddy or a coach, either walking onshore or traveling alongside in a kayak, canoe, paddle board or boat.

While there are always exceptions, it appears that those who swim with a swim buddy or coach often find themselves swimming straighter and faster, sometimes more enjoyably and certainly more safely.

While the safety aspect cannot be discounted, the Hawthorne effect also comes into play. Whether it is at the gym or in a pool, there is a natural tendency to perform differently (i.e., better) when you know you are being watched. That same phenomenon also works in the open water. For some people, they swim better with teammates and friends who they know well. For others, they swim better when they swim with new friends or people they just meet onshore.

For some swimmers, measuring and comparing their time between established points along a course (pier to pier, jetty to jetty, shore to shore) works well and can be motivating in the extreme. Others simply enjoy the freedom and solitude that comes from being alone enveloped in nature.

Some open water swimmers are fanatically empirical in their approach. Swimmers like Gary Emich, who has carefully documented his 751 Alcatraz Island swims over the course of his career, is at this end of the spectrum. Many marathon swimmers and channel aspirants are similarly empirical in their approach. But others simply love to jump in and swim to match their mood or motivations at the time.

While Open Water Source strongly encourages swimming with a swim buddy or even perhaps occasionally escorted by a coach either in the water or onshore, whatever inspires you hop in the open water is good enough.