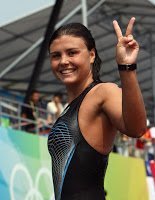 During the 2008 Olympic quadrennial, Russian gold medalist Larisa Ilchenko was unbeatable. The Russian superstar, who will be inducted in the 2012 International Marathon Swimming Hall of Fame this September 22nd on the Queen Mary, was open water swimming royalty.

Ilchenko always won her races dramatically. In anything from 5 km to 10 km in lakes, seas and oceans, she knew her sweet spot.  The former 800 meter freestyler went on a tear between 2004 and 2008.

She knew she was good, she enjoyed the spotlight, and has her signature move, The Ilchenko, as part of the open water swimming vernacular.

As the multiple-time world and Olympic champion, Ilchenko walked the walk. She didn’t walk to the shoreline eyes down, shoulders hunched. No, she strode in, eyes roving, arms loose and with a wide smile. The Alpha Swimmer was a powerful swimmer and was equally powerful on shore in her imposing posture and confident cadence.

Sitting in the ready room before a major competition, it was always telling to watch Ilchenko in her power pose relative to her less confident or nervous competitors. While others were in a contracted position with their arms crossed, sitting with their arms wrapped around their waist, ankles crossed or holding their hands together as they hunched over, Ilchenko was smiling, stretching out as her arms and legs elegantly positioned so her physical presence filled the room.

Barbara psychologist Amy Cuddy described to Wired Magazine how one’s posture and body positioning can literally make one more confident and powerful. “…(you) can make yourself as big as you can in a way that feels natural. Power posing is a way to optimize your brain. It affects your presence, your confidence, enthusiasm, and the ability to captivate.”

The world of open water swimming saw the confidence of Ilchenko and was captivated by her tactical skills, endurance, closing speed and dramatic victories.

Who will her successor be at the 2012 London Olympics? Who has the presence of mind and posture to figuratively stride to victory in the Serpentine?

Britian’s Keri-Anne Payne has that same star quality and charisma as Ilchenko. Whether she stands in front of the cameras in her swimsuit or an evening gown, she elegantly strides and smiles with confidence. She has what it takes to walk in the wake of Ilchenko. But her rivals know that anything can happen in the open water…and will in the Serpentine on August 9th.