Swimming And Surfing In Pre-20th Century 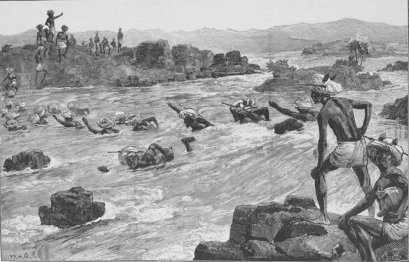 In his essay about African swimmers in ‘Enslaved Swimmers and Divers in the Atlantic World’ included in the March 2006 issue of The Journal of American History, Professor Kevin Dawson wrote, “…Having learned to swim early, many coastal and interior West African men and women incorporated swimming into their recreational and work activities.

The swimming abilities of several disparate ethnic groups were so strong that, independent of Polynesian influence, they invented surfing…Africans in Senegal, Ivory Coast, Ghana, Gabon, and possibly the Congo-Angola region surfed…several hundred of boys and girls sporting together before the beach, and in many places among the rolling and breaking waves, learning to swim…
”

He noted the observations of James Edward Alexander in 1834 at Accra, Ghana that “from the beach, meanwhile, might be seen boys swimming into the sea, with light boards under their stomachs. They waited for a surf; and came rolling like a cloud on top of it.”

In the chapter entitled “Swimming, Surfing and Underwater Diving in Early Modern Atlantic Africa and the African Diaspora”,