Swimming Apart Yet Swimming Together 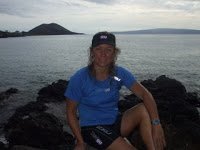 After speaking with Rick Shema – The Weather Guy, Penny Palfrey‘s 72-mile swim in the middle of the Pacific Ocean from Oahu to Kauai is a go for this Saturday around 8 am Hawaii time.

With the trade winds cooperating and the conditions right and with thousands of training hours under her belt, Penny

Meanwhile, her husband Chris will head off to Molokai on Friday night for an early morning Saturday start to his own Molokai Channel attempt from Molokai to Oahu.

Imagine that: as Chris is stroking his way to Oahu, Penny will be swimming away from Oahu.

In the annals of marathon swimming, we do not believe a husband and wife have ever simultaneously attempted separate major channel swims on the same day.

What a way for a married couple to spend the weekend in Hawaii.