Swimming Around Manhattan Island As Good As It Gets

“Back on September 5th 1915, the first authenticated circumnavigation of Manhattan Island was completed by 18-year-old Robert Dowling, Jr. in 13 hours 45 minutes. His record was broken the year later by Ida Elionsky in 11 hours 35 minutes, a young female teenager. Elionsky’s record-breaking swim of a woman beating the men was replicated in 1995 when Shelley Taylor-Smith set a record of 5 hours and 45 minutes.

In 1927, the record was dropped to 8 hours 56 minutes by 25-year-old Bryon Summers who held the Catalina record at the time (set in April 1927 in 13 hours 35 minutes). Summers and his navigator established the modern course for the Manhattan Island Marathon Swim by starting at Hell Gate and swimming counterclockwise around Manhattan Island in synchronization with the tides.”

Captain Johnson has computed the tides for every record attempt from 1983 to 2007 using an algorithm to model the swim he developed as a student at Empire State College. His algorithm predicted the ultimately fastest circumnavigation to be 5 hours 30 minutes.

“I developed this 16-kilobyte computer program in BASIC when the swim record was a little over 7 hours. But it took a Hewlett-Packard computer just about as long to calculate the swim simulation itself.

When International Marathon Swimming Hall of Fame swimmer Paul Asmuth used the algorithm in 1983, he became the first person to swim around Manhattan Island under 7 hours with a time of 6 hours 48 minutes, ushering in the age of computer-assisted marathon swimming.”

With 7-time world professional marathon swimming champion Asmuth in the water and Captain Johnson planning a strategic circumnavigation, the computer analysis revealed that the swimmer’s finishing time was dictated by when and where they began their swim in the tide cycle.

“Over a period of a few years, the record was lowered again until it stood at 6 hours 12 minutes set by Shelley Taylor-Smith in 1985. For six years despite several attempts, no swimmer broke the record although Karen Farnsworth came very close with a 6 hour 13 minute and 5 second effort in 1989.

“The rivers around Manhattan Island were tricky and knowledge was accumulated over time and with much trial and error. In 1991, Kris Rutford made a record attempt based on my model. He was able to match the computer projections through 66% of the swim, but towards the end, Rutford fell behind the computer predictions. The problem was that the tide was rated at 2.7 knots for the ebb in the Hudson River, but this tide is so fast it does not tend to occur every year.

I converted the BASIC algorithm and model to Lotus 1-2-3 and used a portable computer onboard the escort boat to correct for the tidal flow. In the meantime, Rutford caught up with the theoretical predictions to become the first person to swim around Manhattan Island under 6 hours with a time of 5 hours 54 minutes.

True to her competitive nature, Taylor-Smith asked for the opportunity to respond to Rutford’s new standard. Four years later in 1995, the 7-time Australian professional marathon swimming champion got her chance. Starting at Hell Gate at 2:40 am, she swam up the Harlem River on the fastest tide of the year. She swam the entire Harlem River in the dark and reached the Battery ahead of Rutford’s time when she was held up by the Staten Island ferry that was docking at 7 am. Not happy with having to tread water for valuable minutes, Taylor-Smith stayed in place while she hydrated and learned that she was at the same place in the same time as Rutford was when he set the record. Ever motivated, Taylor-Smith took off as soon as the ferry moved out of position and turned on her stereotypical fast turnover for a sprint down the East River. She swam the remaining 7 miles in 1 hour 29 minutes to break Rutford’s record by 9 minutes.”

Her record of 5 hours 45 minutes stood for decades.

Wilkinson used a new model developed by Morty Berger, founder of NYC Swim, that was first rolled out in 2009 when Liz Fry smashed the reverse circumnavigation record around Manhattan Island, previously established by Rutford in 17 hours 48 minutes in 1995 with an unprecedented time of 11 hours 41 minutes.

“Before the 2010 race, Berger predicted that it was possible for Warkentin, Stoychev, Davies and Saracino to all go under 6 hours. The tide predicted for the September 10th record attempt is a comparable 2.7 knot ebb current that pushed both Rutford and Taylor-Smith to their respective record swims.”

But it was the 2011 pair of swimmers who came relatively close to Captain Johnson’s theoretical limit of 5 hours 30 minutes over the 28.5-mile course. 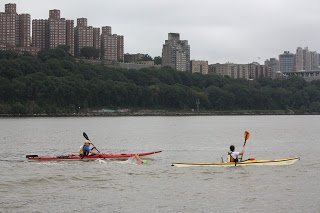 Davies, who finished the 2008 and 2010 Manhattan Island Marathon Swim, set off first shortly after 2:00 pm near the 103rd Street footbridge off Randall’s Island Park. 11 minutes later, Wilkinson, who took fourth in the 2011 Manhattan Island Marathon Swim, started his circumnavigation and gave chase [see on left]. Davies and Wilkinson had to adjust to unusual tidal aftereffects of Tropical Storm Irene along the course, but they swam through the chop as the evening approached. Davies ultimately finished to break Taylor-Smith’s record by just under a minute.

But the celebration wasn’t over, and the clock continued to run as the crowd waited for Wilkinson to come in. Swimming in to finish at 45 seconds faster, Wilkinson became the new overall record holder for the Manhattan Island Marathon Swim.

Daily News of Open Water Swimming: What do you remember most vividly about your record-setting swim around Manhattan?

Oliver Wilkinson: I remember my initial excitement at being invited to have a go at the record, I accepted on the spot. I remember vividly believing that the record was getable given the conditions on the day and actually convincing myself that it was meant to be.

Daily News of Open Water Swimming: What went right during that race?

Oliver Wilkinson: Actually, nearly everything went right. By comparison, I had had a disastrous Manhattan Island Marathon Swim in June that year, goggle-cleaning fluid that had gotten into my eyes had caused corneal oedema during the race. I was swimming almost blind and in extreme discomfort. As a result, I was meticulous in making sure nothing like that would happen this time. The conditions were near perfect with great tides and a very fast flowing Hudson River. I had Richard Clifford as my kayak support; he is an incredibly experienced kayaker and he knows those waters like the back of his hand. I swam the race exactly to my race plan and I broke Shelley’s record by less than 2 minutes and Rondi’s new record by just under a minute.

Daily News of Open Water Swimming: What went wrong during that race?

Oliver Wilkinson: The Hudson got very choppy mid race, the wind picked up and it felt like I was being tossed around like a cork at one point, but the fast-flowing water more than made up for it. We also finished in complete darkness so I had no idea where the finish line was or how much further I had to swim until I had literally finished.

Daily News of Open Water Swimming: Did you plan to swim the race according to your own pace or were you influenced by Rondi?

Oliver Wilkinson: Rondi and I set off 11 minutes apart so we couldn’t pace each other or be accused of assisting each other. As it was, I never saw her all day anyway. I had a plan of how long it should take me to get through each river system if I was going to get close to the record, but essentially it was about swimming at my limit for nearly 6 hours.

Daily News of Open Water Swimming: How physically close were you to each other during the race?

Oliver Wilkinson: I think I closed Rondi down to about 6 minutes at one stage, but then she got away again towards the end. I never saw Rondi and when I asked for updates it was never clear whether the times they were telling me included the 11 minutes head start or not so I honestly had no idea whether I was winning or not.

Daily News of Open Water Swimming: At what point did you know that you were going to set the record?

Oliver Wilkinson: I couldn’t see the finish line because we finished in complete darkness, I only had the city lights in the distance and the glow sticks on the kayaks to guide me. I knew I was almost out of time because I fed every 30 minutes and at the 5 and 1/2 hour mark, Richard had told me I still had about 1 mile to swim. It wasn’t until I swam into the side of the boat on the finish line and Morty Berger told me I had broken the record that I knew I had done it.

Daily News of Open Water Swimming: Would you both have liked to swim head-to-head with Shelley Taylor-Smith?

Oliver Wilkinson: Not really, I suspect she would have beaten me.

Daily News of Open Water Swimming: Do you think on a perfect day with perfect training that you can swim faster around Manhattan?

Oliver Wilkinson: That was my perfect day. I was in the best shape I could have been and apart from a choppy Hudson, conditions were about as good as it gets. I had my best opportunity and I took it.

Daily News of Open Water Swimming: How fast do you think a future record-holder can swim around Manhattan under the perfect conditions?

Oliver Wilkinson: It’s not just about raw swimming speed. In 2010 Peter Stoychev and Mark Warkentin both tried for the record and missed it by over 30 minutes. The conditions have to be optimal and you have to hit each river at just the right time to catch the tides. I don’t know the technical limits well enough of how each river system interrelates with the tides and whether you could realistically go much quicker, but I would imagine there is still 20-30 minutes to be found by a really quick pro swimmer on the perfect day.

Daily News of Open Water Swimming: If you had to pick a swimmer who might set that record sometime in the future, who might that be?

Oliver Wilkinson: It would be nice if it was someone who had a sincere passion for long distance swimming and was active in the marathon swimming community, or alternatively someone who hasn’t been born yet so I get to hang on to the record for a few more years.

Wilkinson’s first-person account of his record, escorted with Margaret Mann and Richard Clifford is posted here.